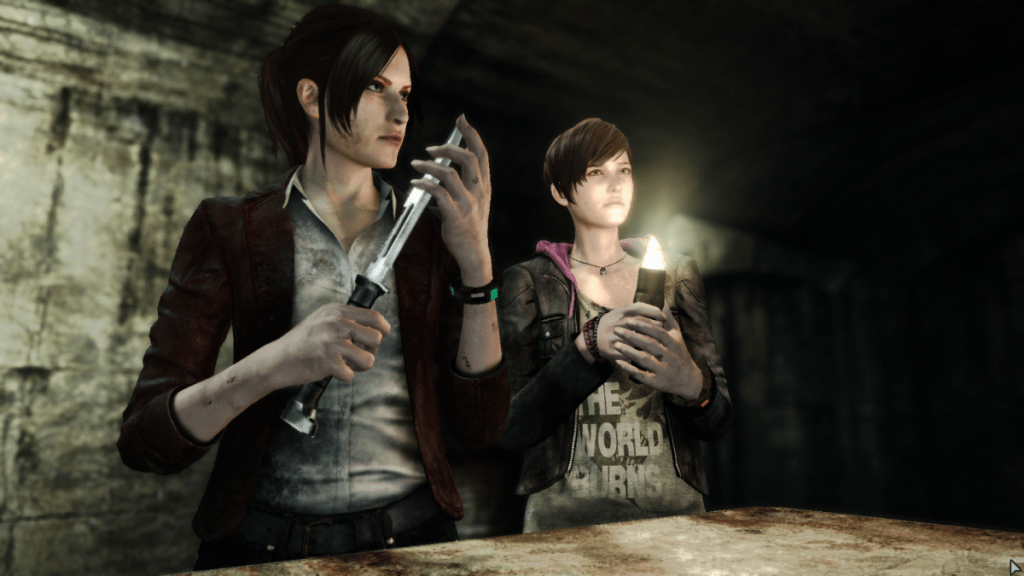 I am not a gun nut. I ignored that perk in Fallout 4. It’s mostly because I suck at accuracy and excel at panicking in a chaotic skirmish. I also don’t find much thrill in a weapon that I have to remember to reload, when my brain bandwidth is pretty spent on remembering not to die. In Left 4 Dead 2, I once abandoned my boomstick to slash a tank with a katana and never felt more alive, which was ironic, because I was meat pulp within seconds.

Don’t get me wrong, I have mad respect for gaming sharpshooters out there. You do you; it’s just not my kind of catharsis. Hence, I reach instead for the magical staff, the flamethrower, the guitar. Or, in the case of Resident Evil: Revelations 2, the torchlight and the brick.

I, for one, skipped the first Revelations. I played RE 5 and RE 6, but truth be told, I remember little else other than Leon’s fabulous hair. Sure, not having a history with RE titles may mean some Easter eggs and cheeky references fly over your head, but hey, you won’t miss all the Claire Sandwich jokes you didn’t get.

That does not mean that Revelations 2 lacks plot. The episodic survival horror game is told through two timelines led by RE veterans Claire Redfield and Barry Burton respectively. Revelations 2 opens with Claire and Moira Burton (yep, Barry’s daughter) being kidnapped and waking up on a deserted island teeming with the violent ‘Afflicted’ (basically, zombies). On their wrists are a bracelet, through which a woman who calls herself the ‘Overseer’ speaks to them. In their desperate bid to escape the island, the gun-toting Claire and crowbar-wielding Moira are increasingly spooked by the Overseer’s sinister taunts and rotting foes wearing the same bracelets.

As Moira once said, to the delight of many players, “What in the moist barrel of fuck?!”

In between Claire and Moira’s story, the game weaves in a later timeline – Barry’s rescue mission upon receiving the S.O.S. call from his daughter on the island. He bumps into a mysterious young girl named Natalia. With her help, Barry follows the faint trail of his estranged daughter while endearing to the strange little miss.

While one can opt for the single player mode, I strongly recommend gaming beginners to grab a partner to play cooperatively in split-screen. Revelations 2 seems to be built for the teamwork of two gamers with differing skills. Newbies who have trouble with aiming (like me) would appreciate Moira and Natalia’s ability to contribute without the need for acute precision.

Moira stuns enemies by shining a torch on their ugly mug, allowing for crowd-control and helping Claire aim more precisely. She can also deliver the pain with her crowbar finishing move (it’s hard to miss with a melee weapon) – essential for a survival horror in which bullets are typically scarce.

Natalia, on the other hand, has a heightened sense for lurking enemies, making her indispensable in avoiding ambushes or strategising attacks. She is able to point out hidden enemies and highlight their weaknesses for Barry to shoot (thus saving ammo) – a skill that my partner and I greatly missed when the story switched back to Claire and Moira.

“Not to point fingers but those are the bad guys.”

The pint-sized protagonist can also stun foes by throwing a well-aimed brick. Or, if you really hate aiming and have unresolved anger issues, running right up to the enemy and clobbering it with the brick works too. Go nuts.

Personally, I find the gameplay of Claire and Barry, who rely on guns and knives, to be ho-hum compared with that of Moira and Natalia. And therein lies the reason why Revelations 2 is so friendly to gaming beginners – it allows them to have fun despite the skill gap. That fun does not necessarily require precision, which leaves room for newbie nerves. I could be panicking in a fight and would still manage to run up to whack an enemy with my crowbar or brick. Alternatively, I could hang back from the action to stun enemies with my torchlight or point out weak points.

Either way, I played a part, instead of feeling like a clumsy burden in the partnership.

Being immortal rocks, too. While Barry and Claire need to heal their wounds manually, Natalia and Moira regenerate health without the need for medicine (or ‘herbs’, because the Resident Evil characters are such hippies). They can still be knocked down and require their partners’ aid, but this means they can’t always be exploited as meat shields.

Accommodating a gaming newbie does not mean the game is dumbed down. The fights and puzzles still pose a stiff challenge for my partner – a seasoned gamer – and I. By giving unique but interdependent abilities to the protagonists, the game forces communication and team effort, which is the whole point of co-op gaming.

As mentioned, I knew and cared very little about RE games going into Revelations 2. I really went in for the brick-throwing and torchlight-shining, because I’m a sucker for unconventional weapons. Hence, I’m surprised that I ended up liking the characters a lot, which gave me more skin in the game – I truly want them to come out okay in the end.

Potty-mouthed Moira plays off serious Claire in an interesting dynamic. But my favourite duo is Barry and Natalia. The little orphan, who clambers clumsily on high steps and carefully duck-walks on slippery paths, is adamant not to be a damsel or a burden. Barry is like a dad to her, checking if she’s okay and holding her hand when they make a tricky descent. The ‘awww’ moments are not schmaltzy, but more bittersweet, considering Barry’s strained relationship with his own daughter, Moira.

Revelations 2 is not a perfect game. It suffers from the occasionally clunky design. For example, the bricks Natalia threw at bosses had no hit feedback, leaving the player with the confusion if her throws mattered at all, which is a slippery slope to existential quandaries about one’s purpose in life (#justsayin). The pacing is a little labored in some episodes. The game is not even that pretty to look at.

The cover is, frankly, an eyesore.

But, as a co-op game, it nails the emotional connection between the protagonists that many other titles fail at. Beyond just two people thrown together in a fight, you want to protect each other. In Revelations 2, thanks to its forgiving design for gaming newbies, you can. 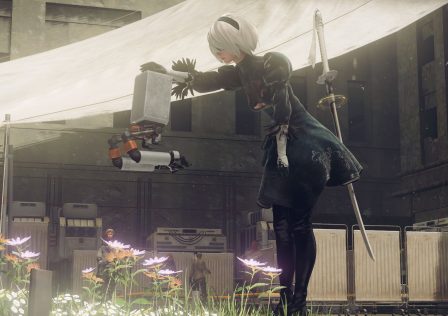