On Happiness Road, emotion is a cross junction | Review 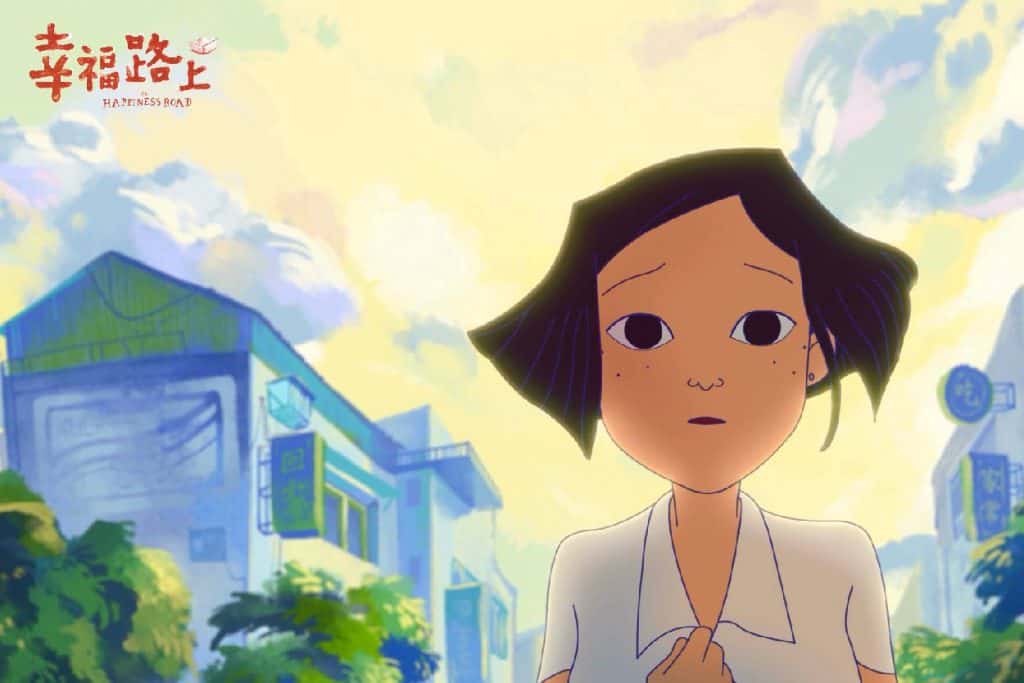 Can one be unhappy on Happiness Road? The answer is both complicated and simple, depending on who you ask in this movie.

The protagonist’s mother (Liao Hui-Jen) would say that it depends on whether you’ve had a good meal, because happiness is simply a full stomach. Her father (Chen Bor-Jeng) may tell you about the best day of his life, complete with an action-packed account on how he cycled his laboring wife to the hospital. Her grandmother (Giwas Gigo) would point out, in her signature wry wisdom, that you are whatever you think you are, wherever you are (you can tell it’s wise because it’s cryptic as heck).

And if you ask the protagonist herself, she may reply with a question, “What is happiness?” It is, after all, what she has been asking throughout On Happiness Road. Watching the gorgeously-animated film would get you wondering the same.

The movie follows Lin Shu-Chi (Gwei Lun-Mei), a Taiwanese woman living in New York, in an introspective and fantastical trip down the memory lane. Said lane is Happiness Road, a street in Taipei where Chi – as well as the director Sung Hsin-Yin – grew up in the 1980s. Chi has returned to her parent’s home following the death of her beloved grandmother to help with the funeral preparations. At least, that was the pretext. Stuck in a shaky marriage to an American husband and a dead-end office job, Chi’s ties to the United States is waning.

As she wanders the quaint industrial neighbourhood that has seen her bouncier days, Chi recalls her childhood: the daydreams by a huge ditch that doubled as a dump, the friendships forged and the tearful goodbyes, and developing a lifelong disgust for poultry dishes.

It was a past worth remembering. Princes were involved. So were maniacal grannies, monstrous teachers, foreboding castles, and evil shadows (with their nefarious tea). They were all the imagination of an innocent kid, as outlandishly dreamy as hand-drawn animation can muster, and just enchanting enough to thinly veil Taiwan’s sociopolitical turbulence in the 1980s that affects even a simple child living on a simple road.

Chi’s fantasies actually neutralises whatever saccharine sentimentality one expects from the title, thanks to their allusions to historical tension as the island transitioned from dictatorship to democracy. A prince from one “No-Book-Reading Kingdom” is a fairy tale of Taiwan’s dark days of martial rule, when one could be executed for reading the ‘wrong’ books. Her classmates’ transformation into voracious chicks gobbling up the exam tips that her teacher dishes out – a privilege she was cut out from as she could not afford the private tuitions of said teacher – speaks of the class divide in the education system. The bob-haired girl’s temporary terror for her indigenous grandmother mirrors the stigma (fanned by society and the state) that native folks were barbaric. And so on.

Sneak-peak: The Prince of ‘No-Book-Reading’ kingdom

It was, essentially, a strained and strange time to grow up – for Chi and for Taiwan. But both managed to get there, with the occasional stumbles. Trying to balance rebellion and expectations in her quest to be the adult she should be, Chi grapples with the same puzzle at every milestone she hits: “I’m here. Now what?”

On Happiness Road does not promise neat epiphanies. What it does offer is masterful voice-acting fleshing out an endearing ensemble of characters. They converse heavily in Taiwanese Hokkien – an insistence of the director that ended up costing her a few potential investors – and Mandarin, but the movie is also well-subbed in English.

In any case, Asian audience who grew up in Taiwan – or at least grew up watching Taiwanese TV shows that once dominated our not-portable screens at home – would get a nice kick of familiarity. There is a special brand of humour that only local colloquialism can bring out.

For her directorial debut, ex-journalist Sung Hsin-Yin did a pretty good job balancing the whimsy and wistful to tell a coming-of-age tale that has no easy answers. Whether Chi succeeded in her pursuit for happiness is open to interpretation.

So is the film’s achievement in reality. On Happiness Road was inspired by Persepolis, a 2007 autobiographical animated feature on a girl’s life in pre- and post-revolutionary Iran, which had taken the world by storm when Sung was studying film directing and screenwriting in the United States. She had hoped her Taiwanese version would grip hearts on an equal scale.

The director’s interview with Mirror Media in Mandarin

Gritting her teeth through renegade producers and troubled finances, Sung used five years and a relatively-modest budget of US$2 million to produce a hand-drawn full length animated feature. The film turned out to be a darling of film festival circuits, bagging recognitions from the Tokyo Anime Award Festival 2018, Annecy 2018, 54th Golden Horse Film Festival and many more.

Outside of film circles, however, On Happiness Road remains an obscure indie work. Released in Taiwan in January, it only grossed a paltry US$430,000 in the domestic box office.

So did the movie reach its end goal? There are no easy answers.

But, as the movie taught us to ask, does it matter? Whether it is happiness or success or political change, there is no fixed definition. It is merely a matter of perspective. The grandmother, coming back as a spirit, told Chi so. And what good would come out of arguing with a ghostly matriarch?

“When has there ever been such a thing as eternal happiness?”