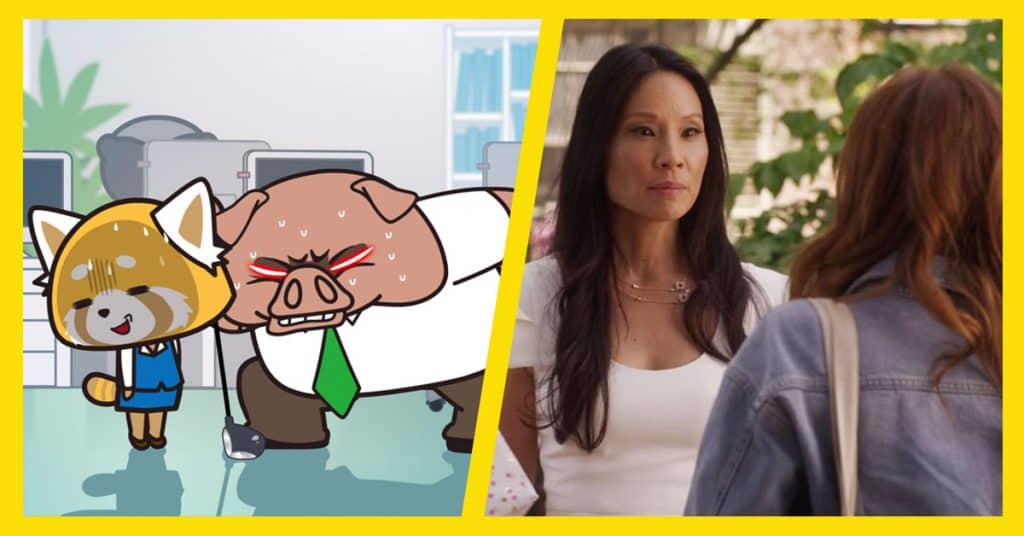 Toxic bosses: What Aggretsuko got right and Set It Up didn’t

What does a red panda in Tokyo, an executive assistant in New York City, and – possibly – you have in common? Horrible bosses. You know, the kind that makes your soul shrivel just that much further when you wake up in the morning and realise it’s another Monday (it’s Saturday, actually).

While worlds apart in culture and character species, Set It Up and Aggretsuko are both Netflix Original hits released earlier this year about bullied office workers.

Set It Up is a romantic comedy about two overworked and underpaid assistants, Harper (Zoey Deutch) and Charlie (Glen Powell), trying to matchmake their bosses-from-hell.

Harper works for Kirsten Stevens (Lucy Liu), a hard-boiled sports editor who expects her frazzled assistant to arrive earlier than her the next morning even though she worked Harper until late the day before (just to… get her fitness tracker to 10,000 steps and order her dinner? That she ends up not eating?), sends Harper to a store two hours away to return a sweater then want it back again, and generally demeans Harper for every little mishap in her life.

Charlie’s boss, Rick Otis (Taye Diggs), is a short-tempered – how do I put it politely – jerk who takes out his self-entitled rage on paperwork, printers, laptops, office chairs, but mostly on his wrung-dry helper.

Harper and Charlie figure that if the slave-drivers fall in love with each other, they may be less focused on work and actually let their employees have a life.

Aggretsuko, on the other hand, is a refreshingly subversive Japanese anime series that follows a timid accounting clerk, Retsuko the red panda, as she navigates through office politics and toxic leadership. Director Ton, who happens to be a literal misogynistic pig, piles workload, sexist bias and verbal slurs on her without actually doing any real work himself. Retsuko’s secret to survive another day? Screaming death metal songs into a microphone.

The bosses in both comedies were played for laughs. But they reflect a reality that is no joking matter, especially in Asia.

It has been a watershed year for workplace harassment. The #metoo wave saw sleazy superiors crawling out of the woodwork onto newspaper headlines. In Japan, the open secret of power harassment in the office boiled over when employees died from being forced to keep brutal work schedules. Several auditors in Malaysia also called out the overtime culture of the hierarchical industry, in which “you can only leave when your boss or seniors leave”, after an auditor was allegedly killed in an accident while returning home from work at 2am.

Given the gravity of the situation, Set It Up dropped the ball. The movie not only sugar coated carcinogenic commandeering, but reinforced it.

To be fair, Set It Up – beloved by critics for rekindling the rom-com nostalgia – did not glorify the terrible bosses. It showed the psychological torture that both bosses inflict upon their assistants. What is cringey, though, is how it tried to justify Kirsten/Lucy Liu’s power harassment in one scene.

Kirsten: I know I’ve been cunty. And it’s partly because you’re young, and your skin bounces back, and it annoys me, but really, it’s because I want you to succeed.

Harper: What do you mean?

Kirsten: I see so much potential in you. But you have to have tough skin. So, if I’m the most awful person when this shitstorm of an industry is hard on you, I know that you’ll be prepared.

And suddenly, the film gives Kirsten a sympathetic filter. She is seemingly ‘exonerated’ with no comeuppance from Harper or anyone else (at least Rick got coffee thrown on his shirt at the end). When Rick secretly cheated on Kirsten before their destination wedding, Charlie rushes to the airport to tell her not to get married (while a manipulatively-emotional score plays in the background):

Is Kirsten really that great a person, though? Yes, she works hard, and she is a badass for fighting her way up in the male-dominated playing field of sports journalism. And yes, practically no one deserves to marry the man-child named Rick. But, in terms of being a boss, Kirsten is no better.

Or, perhaps, she is worse. At least Rick never pretended his abuse to be tough love. Kirsten, on the other hand, reasons that the grueling hours and diva demands – including keeping Harper at work past midnight just so she has someone to wake her from a nap – was for her assistant’s own good.

No. You don’t help someone weather the “shitstorm of an industry” by adding more shit to the storm and throwing your workers in it, telling them that this is what it takes to succeed.

Our culture is trapped in the narrative that power equals doing whatever you want with people who are dependent on you.

Aggretsuko, coming from a country where power harassment is so ubiquitous that working to death has a word (“karoshi”), addressed the issue of toxic leadership with more finesse. Like Kirsten in Set It Up, the hated Director Ton was eventually given a sympathetic spin. After his superior warned him of his abrasive behaviour, he tells Retsuko at an office party:

“I also learned my lesson. I was worked to the bone when I was young. Now, if you give orders the same way, they complain of ‘power harassment’. Times have changed. I guess I’m growing old. You’ve been through a lot as well. I went a little too far. I’m sorry about everything.”

That does not make his bullying okay, of course. In fact, he pretty much bounced back to his old self afterwards. But that minute-long scene looked power harassment in the eye and highlighted the vicious cycle. Our culture is trapped in the narrative that power equals doing whatever you want with people who are dependent on you. Employees who only knew abuse may rise the ranks themselves and perpetuate the supposed ‘rite of promotion’.

This reminds me of when I first joined the journalism industry. As an undergraduate, our lecturers repeated ad nauseam that it is normal for editors to rip us a new one. Or having our articles thrown back at our faces (a friend experienced this personally). Or just open verbal fire at us, no reason required. Editors were meant to be feared. Everyone would, apparently, be the better for it.

I showed up as an intern in a newsroom fully expecting the worst, but telling myself to swallow whatever comes because that’s how the world works. That’s how I prove that I’m tough enough for the high-pressure journalism game.

But one of the editors surprised me. She was always kind and patient. Experienced, but not the jaded short-fuse stereotype. Despite her own deadlines, I remember the times she sat me down beside her as she went through each line of my amateur reporting, guiding me on how to write better and the rookie mistakes to avoid.

Thanks to this editor, I realised that it is not that a boss is mean. It is that a boss chooses to be mean. Her kindness taught me to not confuse bullying with leadership, and to not accept inordinate and unprofessional put-down as an excuse to toughen me up.

Unlike Kirsten of Set It Up and Director Ton of Aggretsuko, my editor did not perpetuate the cycle of power play, and, inadvertently, broke me out of the ‘shitstorm’ too.