Chucking out bad memories by checking in with Lost Spaces | Review 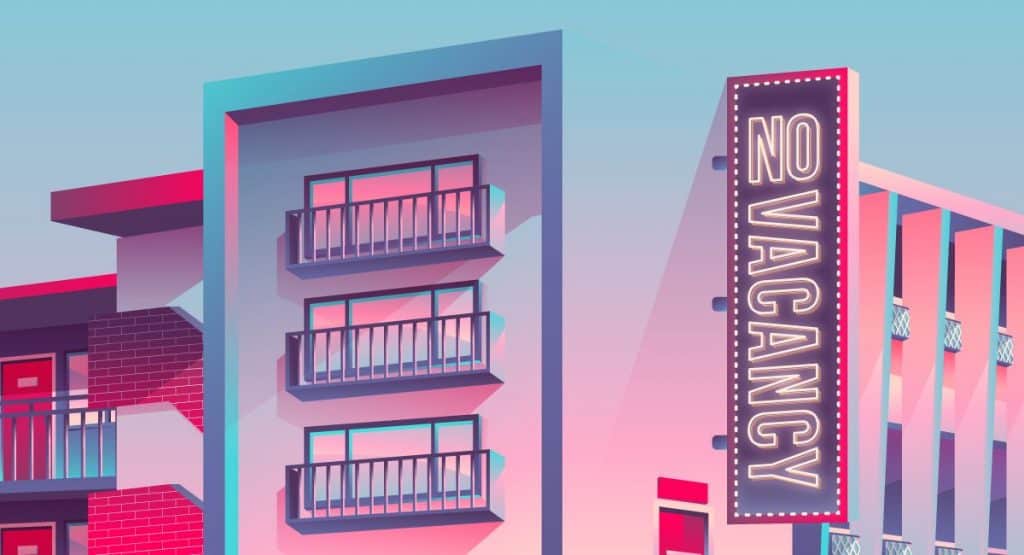 If there’s one thing I didn’t expect while listening to Lost Spaces’ debut album, no-vacancy, it would be how much introspection, retrospection and realisation I got from listening to the 14 tracks on the album. These thoughts were mainly about my own experience with dating and relationships, and of course uncountable ones I’ve heard from others.

So okay, it doesn’t take a lot for albums or songs to get me to do a little bit of soul-searching but here’s the kicker — with no-vacancy, one of the main thoughts that I found repeatedly bouncing through my head is how in this digital age, where things are supposed to be easier, finding a genuine and honest connection with someone is so much harder.

We can have food delivered to our doorsteps using apps and buy stuff from halfway across the world, but when it comes to creating a meaningful connection with another human being, we’re either suffering from bad latency or are just disconnected. If you feel the same way that I do, you would probably find a good connection with no-vacancy.

As I mentioned before, a lot of the band’s tracks are about the troubles millennials seem to face when it comes to finding love. This may not be an entirely new subject matter, but what makes no-vacancy different is that Lost Spaces has essentially created an album that plays out like a diary of lead singer and writer, Sam Lopez’s chequered love life. I found it to be heartfelt and relatable, especially since I’ve been in the same situations and have felt the same emotions projected in the songs.

The album starts off with a phone call to the Dorian motel. We hear a female voice asking if a room is available but is told that the motel is closed for good. According to the album concept shared with us, the motel here is a metaphor for Lopez’s heart. By saying that it is no longer open, it means he no longer wants to let anybody else in for the fear of being hurt. Thus, no-vacancy. However, not all of the songs on the album are about shutting people out. It starts off that way but towards the later tracks, it’s more about Lopez seemingly finding closure, moving on and ready to give love a shot again.

If you were a fan of the eight singles the band released before this, then you will likely be a fan of no-vacancy. The five (minus the intro) new tracks are more of the same, filled with synth tunes that are upbeat or incredibly chill, complemented by Lopez’s dulcet and mellow delivery of sombre lyrics laden with witty wordplay and modern youth references.

Another fine little detail is how the band uses sound effects, such as the sound of fingers tapping on a smartphone’s keyboard, that really drives home how many of us “work” on our relationships these days, via messaging.

One thing I found quite perplexing was the band’s decision to remove the monologue from the track “instant.romance”, where a member talks about his frustrations with modern dating. On the other hand, one of the new tracks, “drunk-dial.confessions”, actually has a monologue — a confession, in this case — which definitely adds more character and the overall relatability of the song.

So if it isn’t obvious by now, I am a fan of what Lost Spaces has created. It’s an album with songs that echo what I would have probably uttered to my friends during conversations, or my internal monologues. The chorus in “instant.romance” reflects my feelings about the old adage “falling in love at first glance”:

“I mean what was I expecting / An instant romance? / When there’s no such thing as falling in Love at a first glance [sic]”

If you’ve experienced the endless swiping on Tinder, initiating conversations on OKCupid only to be ghosted or rejected, you’d probably feel a little jaded too.

“drunk-dial.confessions” reflects the story of the time I was drunk on love (or was it desperate for a relationship?) that I ignored the red flags my friends threw at me:

But at the end of the day, we all learn and grow through our failed relationships. It helps us figure out what we want and don’t want. Usually, when you least expect it, someone will come and make you love and feel loved again, just like what is described in the chorus of “slow.dance”:

“I know I said I can’t be in love again / But I think we could just be more than friends / My heart is telling me to take this chance / So I’ll take your hand , If you’ll have this dance”

Heartfelt, honest, relatable and plain enjoyable to listen to. That’s how I would sum up no-vacancy. It’s one of those albums that I keep going back to, finding new meanings with every listen. If you’re going through a rough time, especially in the relationship department, give this album a listen. It’s similar to receiving a call from the concierge to inform you that there’s more to a hotel or motel. There’s always a reason to step out and explore what’s on offer.