Sierra Burgess is a Loser, but that’s not the worst part | Review 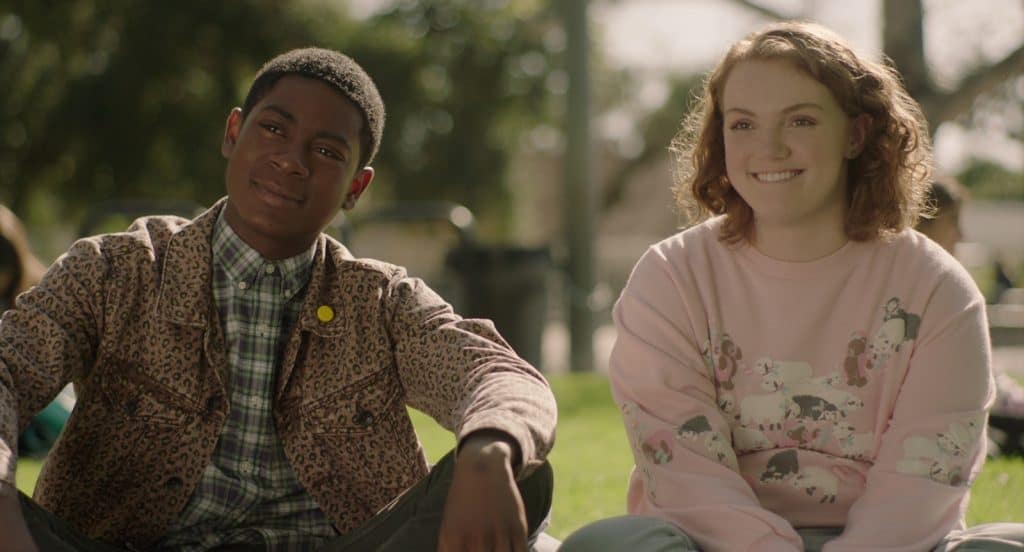 Netflix’s Sierra Burgess is a Loser makes some risky bets. The teen flick casts a plus-size girl as the staple ‘uncool’ protagonist, a role typically filled unconvincingly by the Hollywood Homely (as someone who shops XL, I was inordinately excited about the casting). Its story revolves around duping someone’s feelings. It flirts with the contentious issue of consent.

But there was hope for commentary amidst the cringe – the movie was produced by Netflix, which frequently tackles tricky/trigger topics to make a point, and had been released on the heels of another of Netflix’s beloved teen rom-com To All the Boys I Loved Before (our review here).

Sierra Burgess is a Loser is as refreshing as it is a difficult sell. Too bad it also takes the easy way out.

The titular heroine, Sierra (Shannon Purser), is a soft-spoken, straight-As-scoring high school senior. The bespectacled teen appears slightly self-conscious, especially as the daughter of renowned parents, but nonetheless comfortable enough in her own skin to stand up to the verbal bullying of the school’s queen bee, Veronica (Kristine Froseth).

When she receives a random text message from a hot football quarterback, Jamey (Noah Centino), Sierra finds herself crushing hard. Even after she realises that Jamey hadn’t meant to text her – he thinks he is talking to the gorgeous Veronica. Carried away by the moment (or hormones), she pretends to be Veronica and continues a phone fling with the unsuspecting Jamey.

Meanwhile, Dan (RJ Cyler), the sassy Voice-of-Reason BFF calls out Sierra’s creepy catfishing behaviour. But Sierra sinks deeper. For a more convincing cover, Sierra bartered with the actual Veronica, who was pining for her older ex-boyfriend. Sierra would help Veronica win back her former bae by, well, ‘tutoring’ her philosophy (I don’t get how this works either). In return, Veronica has to play along with deceiving Jamey.

The more time the girls spent together, however, the more they developed a soft spot for each other. And this is where the movie wins. For a story about getting the unattainable guy, Sierra and Veronica’s interaction aces the Bechdel test. They rarely talk about boys (except when carrying out their con), unless you count their discussion on famous dudes like Nietzsche and Dorian Gray.

Sierra and Veronica started out as clashing personalities. Purser nails the subtlety of Sierra, who moves and talks with all the self-consciousness of someone worried about taking up too much space (she even keeps her mop of red hair clipped neatly at the sides). Veronica, on the other hand, packs a fiendish big-talker in that lithe frame of a cheerleader. And they never discovered much similarities throughout the movie.

What the girls do discover is that they can talk to each other, and that each has vulnerabilities and strengths that the other respects. The movie carves out quiet moments to develop this, rather than just randomly assigning Sierra and Veronica the same tastes in music or movies or whatever is the quickest route to Hollywood sisterhood.

There is, unfortunately, little else to like about Sierra Burgess is a Loser. Most of the cast are rather one-dimensional – even best-friend-Dan, who seemed to have all the best lines in the movie. Jamey subverts the usual douche-jock stereotype to be the caring catch. But after watching the actor played pretty much the same character in To All the Boys I Loved Before, the sexy-but-sensitive personality seemed – perhaps unfairly – more like a Centino-schtick.

The cinematography is mostly wonderful, but it is like being in an Ikea showroom with mismatched furniture and an uncomfortable couch. You can’t quite settle into the film’s inconsistent themes and Sierra’s cringe-worthy exploits.

It is, at best, a fantasy-fulfillment for big girls like me. Or, at worst, an excuse for us to act out. Because Sierra Burgess is not a loser. She is far worse.

WARNING: YOU ARE ENTERING SPOILER TERRITORY

At one point, I realised that I was watching the story of a villain. It’s not when Sierra kisses the blind-folded Jamey, who thinks he was smooching Veronica. It’s also not when she pretends to be deaf and mute when she bumps into Jamey in the flesh, in front of his deaf and mute brother. It’s not even when she, in a flash of jealousy when catching Jamey kissing the actual Veronica, broadcasts Veronica’s embarrassing heartbreak to the whole school.

It’s when the teary Sierra, being told off by Dan for stooping so low, comes home to her surprised parents. She yells at them, “You know, it’s easy for you to spout your self-esteem BS, but look at me. Do you have any idea what’s it like to be a teenage girl and to look like this?”

I do. I was that teenage girl, and still am that grown woman. What I don’t get is how exactly Sierra’s looks justify her actions. While many women have suffered debilitating bullying or shaming for their weight, Sierra didn’t. Her life, in fact, looks pretty great. She has a supportive best friend, loving folks and good grades. She had one bully, Veronica, which she shook off easily and eventually befriends.

It is already tricky to justify terrible actions with a sob story. Sierra doesn’t even have one. Her catfishing caper was all because she wanted a guy and didn’t have enough confidence to do it honestly.

And that wasn’t a bad turn for a movie. In fact, I thought that’s where things got interesting – when Sierra goes on to accuse her parents for not understanding her plight of being unattractive (“You’re tiny and you’re beautiful, and this is what you stuck me with”), I thought the film was being ironic. Is it laying bare that Sierra’s self-destruction, beginning from the moment when she masked her identity to talk to Jamey, was not caused by anyone else but by the low worth she placed on herself?  Will the ‘magnificent beast’ (what she called her reflection in the mirror) be undone by her self-absorption?

This is not the first time a teen movie has ‘called out’ its own narcissistic lead. The Edge of Seventeen made a valiant effort in 2016.

But Sierra Burgess is a Loser does not go there. It forgives Sierra swiftly.  Her apology tour consists of her saying one sorry to Dan, one sorry (in a text message) to Jamey, and playing a song she wrote for her father and Veronica.

There is not a shred of sorry in that song, though. The lyrics are, in a gist, her lamenting about not being seen and wondering if she would be wanted if she became someone else.

At the very end, even after she won the guy, Sierra still blames her exploits on the harsh life she never exactly had.

Jamey: Look Sierra, what you did was terrible. I mean, bad, like, really bad, and…

Sierra: I know, and I am so sorry. But do you ever feel sometimes the world is conspiring against you? To tell you that you are not good enough.

Jamey goes on to say that he understands, and that he may not have noticed Sierra if she hadn’t hoodwinked him.

Err, so how does this square with Dad’s speech on how Sierra should be herself just moments ago? In fact, “Just be you” is the film’s tagline.

The biggest problem with the movie isn’t that it lets Sierra off the hook by blaming a circumstance that it failed to set up. Or that it passes off despicable behaviours as romance. It is the conflicting messages, possibly a result of taking on a controversial subject and not being bold enough to look it in the eye.

Like the heroine it so readily forgives, Sierra Burgess is a Loser loses because it takes the easy way out.