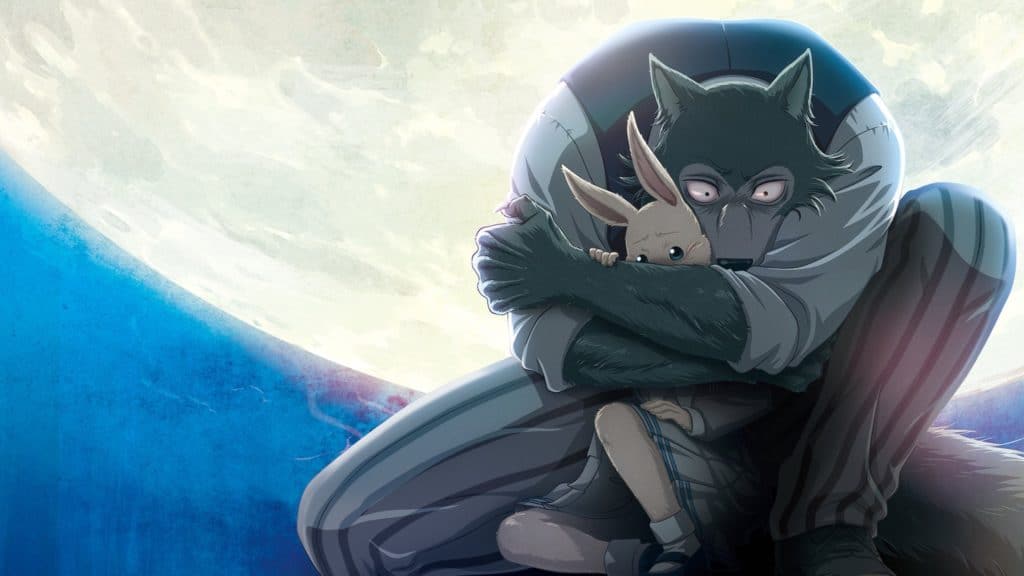 I had misgivings about watching Beastars — now on Netflix — when I first saw the poster. From what I remembered about Disney cartoons in my childhood, anthropomorphic animals always had a more innocent (and often adorable) appearance in a story. Times have certainly changed in the age of Tumblr, DeviantArt and other fan art sites, that has helped ‘mature’ anthropomorphic animals into new, sexually-charged norms (just google ‘furry art’).

So it was hard not to be wary towards this anime adaptation of Pagu Itagaki’s manga, which has claimed to share the same artistic roots as Disney’s more innocent use of anthropomorphised characters, but seems just as possibly created to appeal to a certain fetish (see this season’s Murenase! Seton Gakuen).

But, hidden deep within its furry outlook, Beastars is not only another milestone for Studio Orange’s innovative and exciting use of 3D artistry (since their illustrious use in Land of the Lustrous), but also quite a beast to unpack in its storytelling.

Let’s set the stage. Beastars is set in Cherryton Academy, a prestigious boarding school that is a microcosm of a society where herbivores and carnivores have learned to coexist as a society on mostly equal (and safe) grounds. At Cherryton, the herbivore and carnivore students have integrated. They study together, they eat together, and do fun club activities together.

This might sound similar to the setting of Disney’s Zootopia, which imagines how different animals can live together and the social tension that may arise from it. But Beastars goes even deeper in its conception with grey undertones, exploring with more sobriety on how the food chain turns into friendships (and vice versa). The underpinning unease is that carnivores have adapted to a lifestyle that doesn’t give them any physiological reason to prey on the herbivores for survival. Yet, some still do it to sate their predatory instincts, which by the social norms of this world is frowned upon.

On the outset, Beastars is a compelling high-school anime, complete with the teenage drama, comedy and romance that school grounds are uniquely fertile for. Though it doesn’t quite readily shake off the templatic Japanese high-school affair, it is still able to use those set pieces to set up subversions or for re-examining them in an animalistic context.

But any safe assumptions of Beastars living in an ideal animal utopia is challenged right from the opening of the first episode. When a herbivore is found eaten on Cherryton’s grounds, it sets off an air of distrust between the herbivores and carnivores that permeates throughout the series.

On the surface, the herbivores shun the carnivores as being untrustworthy and always dangerous, while the carnivores don’t enjoy the discrimination they are getting for it. The nuances of social hierarchy, power structures, and its effects on the characters are the prevalent driving forces in the world-building of Beastars. While we are made to believe that the herbivores and carnivores are living on a levelled plain, the second main arc reveals that it’s still very much a ruthless pyramid, clothed in the skin of decency and superficial tolerance.

This large setup pins small and difficult questions about tolerance and its limits (those that multiracial Malaysia — my home — is also grappling with). Can a society, especially one that has a power structure based on specific attributes like race and beliefs, ever sustain itself and change the status quo by merely respecting boundaries?

For a series about animals, #Beastars has outdone itself in being a realistic exploration of human nature and conflict. #Netflix #anime Tweet this!

Nature is also another force that is constantly at odds with the characters. This struggle is made real by the protagonist, the grey wolf, Legoshi, who often suppresses his primal instincts as a predator. After his first brush with the white dwarf rabbit, Haru, that nearly ends with him eating her, he becomes anxious of what he is truly capable of towards a weaker herbivore, and spends the entirety of the season tussling with his darker side. On the other hand, there are some characters who gladly embrace that aspect of their predatory nature, believing that it would be disingenuous to not be upfront about it.

A brave stance that Beastars also takes is that it doesn’t naively make these just ideological debates. Our own survival instincts could just as easily work against the ideals that we strive for. When Legoshi and Haru go on a dinner date, Haru’s flight response is reflexively triggered every time she sees Legoshi take a chomp on his food. Legoshi himself spends the entirety of the first season figuring out if his attraction towards Haru is driven by rationalised feelings or feral instincts.

This is even further complicated by societal pressures. For both Legoshi and Haru, going against the grain of their own respective sides makes them outcasts to their own kind. Legoshi doesn’t bare his fangs often enough. This brings him in direct confrontation with predators that fully embrace every opportunity to exercise their predatory dominance, who sow doubt in him that not suscepting to his nature is actually harmful to his well-being.

On the other hand, Haru is scorned because her perceived meekness makes her the receiving end of superficial kindness, while also a target of jealousy from those whose affections are perceived to be stolen by her. This brings in another view that even among allies, we can still be made enemies for being deviants to the cause, even if we just want to hold onto something that is truer to ourselves.

For a series about animals, Beastars has outdone itself in being a realistic exploration of human nature and conflict, thanks to its strong sense of world-building and complex characters. While the first season has already wrapped up, it has raised even more questions about how we see ourselves, and that deserves an anticipated second season.