Bumblebee reignites a spark of hope for Transformers | Review When Paramount Pictures announced that they were filming a Bumblebee spin-off, I screamed “WHY?!? WHAT FOR?!?” and was ready to unleash a swarm of complaints . You can’t really blame me, can you? Michael Bay bumbled big time with his movie series on the beloved robots in disguise.

Also, out of all the bots in the franchise’s storied lore and various iterations, Bumblebee has always been my favourite. He has always been the small bot with a big heart — never the strongest but was brave, loyal, smart and persevered through adversity. As the runt of the litter in my immediate and extended family, Bee showed me that, often times, brains and heart are just as or more important than brawn.

My “obsession” with Bumblebee even goes so far as wanting to own a yellow hatchback when Cartoon Network aired the Transformers: Animated series eleven years ago. I dreamt of buying a yellow Perodua Myvi and detailing it with the singular black stripe so that I could have my very own Bumblebee. Due to financial constraints, that never quite happened. I just settled for the action figure. 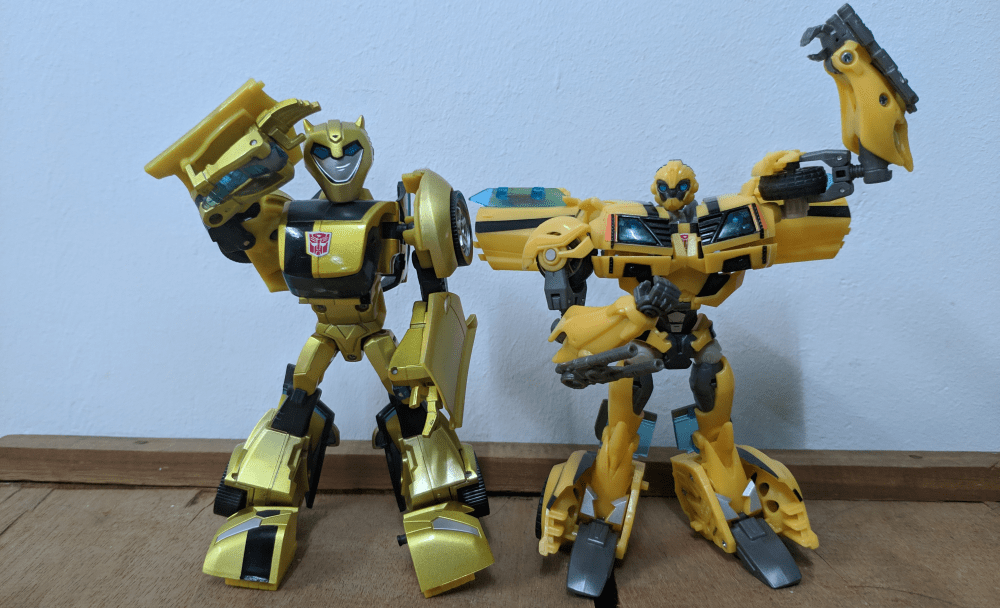 My personal and growing hive of Bees.

So, as you can imagine, having one of my childhood heroes turned into a mute and fairly scary-looking bot had me cringing all throughout the first “Bayformers” movie. But when I found out Travis Knight, of Kubo and the Two Strings fame, was directing it, I regained a spark of hope.

I have to say, Knight has done the unthinkable: he managed to undo the travesty of Bay. I would even go so far to say that with this movie, Knight has (re)created The Iron Giant for a new generation.

Sure, Bumblebee does not send an anti-war message like the 1999 cult classic. But both share a premise about a giant alien robot crash landing on Earth; forms an unlikely bond with a human child/teen; learns about human culture and behaviour; and is deemed a threat by the government or military while having to fend off the real villains.

My problem with Bayformers’ portrayal of Bumblebee was how much of a throwaway character he was. He was supposed to be a ‘protector’ of the human leads in the movie, but the emotional connection between them was cold as metal. Had you switch Bumblebee with any other bot, that “protector” role would still be served. I won’t deny that there was a cool factor to Bay’s Bee, but he seemed more like a high-school jock (cue peeing scene in the first movie) and not the bot with the heart of gold.

Knight, on the other hand, knocked it out of the park with his portrayal of Bee bar the characteristics in Bay’s movies. We get a Bee that’s very close to the various iterations of the yellow bot in the comics and cartoons — one that has spent the most time with humans and understands them the best as he learns their (strange) customs, and also shares an affinity for human pop culture. There’s also that childlike innocence to this version of Bee, which easily endears him to viewers.

Another great thing about Knight’s Bee is how he is fiercely loyal and protective of Charlie Watson (Hailee Steinfeld), not because she holds an important key to restoring his planet but because she is his very first friend on Earth. He genuinely cares about her. Much like any friend, Bee listens to, comforts and motivates Charlie. He even ends up becoming the reason Charlie overcomes a crippling fear. Essentially, both characters are catalysts for change and growth for each other — very much like the Amblin-esque films of the 80s that Knight alluded to during interviews.

Interactions between Charlie and Bee are cute and fairly natural. The pair’s relationship really blooms and grows throughout the runtime of the movie and in the end, it’s easy to believe that they really care for each other. It wasn’t as hamfisted as the relationship between Sam Witwicky (the protagonist of Bay’s first Transformers movie, played by Shia LeBeouf) and Bee, which was more of a glorified bodyguard and occasional comic relief (nuisance).

This is Sam Witwicky. Sam is a frustrating human being. Don’t be like Sam.

This is why I’m not going to complain about Bumblebee being mute this time. Knight and his team of animators and artists managed to humanise Bee in a major way via his facial expressions, body movements and eyes.

How can you not fall in love with those big blue eyes?

When it comes to bot-on-bot action though, I would have to say Bumblebee is leaps and bounds better compared to the Bayformers for two reasons. I’m glad that Knight decided NOT to take a page out of Bay’s book as he’s kept the roster of bots tiny compared to the bloated roster of Bayformers. Yes, the Generation-One-esque Optimus Prime, Shockwave and Soundwave are in the movie (Woohoo!) but they only show up for about five minutes.

So, all in all, the spotlight shines brightly on Bumblebee and the two main Decepticons, Shatter and Dropkick. This then leads to my second reason on why the bot-on-bot action in Bumblebee is better — you actually get to see them transform and duke it out in all their glory. There’s no off-screen or five-second death sequences here and boy, those fight scenes are just such a joy to watch. Unlike the messy metal-clashes we get in the previous movies, the fights in Bumblebee have style and substance.


Bumblebee is hands down the best movie in the franchise. I’ll shamelessly declare that Knight “deconreconed” the Transformer series, breaking the previous movies down to its moving parts and rebuilt it into something better. You get an enjoyable movie that has a very balanced mix of emotions, humour and action.

It’s just sad that this is actually a prequel to the first Transformers movie and we might not get another movie directed by Knight, unless of course, they decide to do a spin-off on Optimus Prime or Megatron. BECAUSE WHY NOT?!?