The true Crime of Grindelwald? Not enough of Newt Scamander

There are many crimes to The Crimes of Grindelwald. It is a sequel that is Too Much – too many characters, too many subplots, and too many unneeded diversions towards expanding lore and tying up ends. It feels more like a movie made to set up further movies – the Batman V Superman of the Potterverse, if you will.

But perhaps the biggest crime here is merely having far too little of Newt Scamander, the protagonist of the Fantastic Beasts spin-off of the Harry Potter movies. Played wonderfully by Eddie Redmayne, Newt is quite rightly one of the best inclusions to the Harry Potter universe.

I say this, because Newt Scamander is one of the most compelling leading male protagonists in recent memory, especially in a blockbuster franchise that is meant to endure across multiple films. Newt exhibits little of what typically passes for a leading male in a big budget production. He’s not athletic or physically endowed. He’s not a terrific fighter nor is he a “chosen one”. He’s intelligent, but not insufferable or witty. He is a subversion of leading men masculinity, most wondrously explored in this video here by the Pop Culture Detective.

A bit more of Jacob (Dan Fogler)  would be nice, too. He’s quite the subversion of typical Hollywood masculinity as well

Newt is a “Magizoologist”, making him the Steve Irwin of the wizarding world. But rather than wrestle the fantastic beasts into submission, Newt employs a variety of unaggressive methods to calm and befriend them. In the previous film, Newt finds himself in 1926 New York in a bid to release a mythical Thunderbird back to its natural habitat, meeting new friends along the way and getting embroiled in a governmental tangle revolving around Credence (Ezra Miller), an Obscurial (basically a host to a lot of pent up, suppressed magical power)

At the start of The True Crimes of Grindelwald, Newt is tasked by a younger Albus Dumbledore (Jude Law) to seek out Credence, who may be instrumental to dark wizard Gellert Grindelwald (Johnny Depp)’s plan to expand his influence.

“What do you mean I don’t get off my desk and do anything on my own? I delegate! I’m a delegator.”

Newt’s the best person for the job, because what truly defines him as a character is Empathy – his ability to connect and care for not only magical beasts, but the people around him. Newt solves his problems not with force or violence, but through kindness and understanding. Faced with what’s deemed a malevolent and dangerous entity, and his first reaction is to approach it with diplomacy.

Yet Newt is so underutilised here that it feels like he’s hardly the protagonist anymore. As more and more characters crowd the screen, bringing with them a plethora of subplots, Newt barely has the time (and space) to develop or have meaningful interactions. This is in stark contrast to the previous film, which – despite its own convolutedness – ensures that the meat of the story centres around Newt and the relationships he has with his eventual friends. In The Crimes of Grindelwald, Newt feels like an unwanted relic of a franchise that feels keen to divorce from the Fantastic Beasts aspect, but not knowing how to.

I would argue that if The Crimes of Grindelwald had focused on Newt and his core values, it would allow Newt to be the direct antithesis to Grindelwald, the franchise’s major baddie and fascist extraordinaire. But before we proceed further:

In The Crimes of Grindelwald, Newt’s central conflict is having his inherent kindness and passivity being called to question. As the movie begins, the dark lord Gellert Grindelwald – who was captured in the last movie, largely thanks to Newt – escapes and begins rallying his supporters. It’s a world that requires people to choose and fight, and it’s not long before Newt’s Auror brother, Theseus, asks that he “picks a side.” Newt, of course, doesn’t. He’s too nice, after all. As his childhood friend Leta Lestrange puts it, Newt is “too good”, and that “there’s no monster he wouldn’t love.”

Focusing on Newt’s kindness at the face of adversity would’ve played nicely into the film’s core themes – that of racism and exclusion. Grindelwald intends to rule over non-magical people and allow wizards to live openly. Manipulating people with fear and faux kindness, the dark lord  exploits the anxiety on the impending Second World War to draw people to his side. Such fear tactics and a focus on “pure-blooded” wizards and their right to rule alludes to Nazism and fascism during its time, and real-world sentiments today. A movie that asks how kindness and empathy would do in the face of such adversity would’ve been compelling, perhaps even important.

Doesn’t having one weird eye disqualify you from being an Aryan wizard? I guess we need a handbook

And The Crimes of Grindelwald does, perhaps, address this. Newt does choose a side, in the end, and whether he likes it or not, he will have to fight in the future. But in introducing Nagini, or exploring the complicated backstory of the Lestrange family tree, or in shoehorning the twist of Credence being Dumbledore’s brother (what?), the movie draws further and further away from Newt Scamander, and thus further and further away from his central conflict and, subsequently, the movie’s central conflict.

Future Fantastic Beast movies need to remember that Newt Scamander is the heart and soul of the franchise. At the core of its burgeoning lore and great world building, the Potterverse is held up by its characters. Newt may not be the Chosen One here, but he’s the hero the wizarding world needs (and deserves).

So yeah, just give us more Newt Scamander, please. And perhaps less of Nicolas Flamel, who is truly pointless in the film.

This fanservice could do with a nap 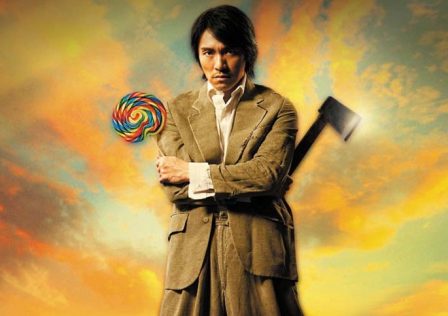