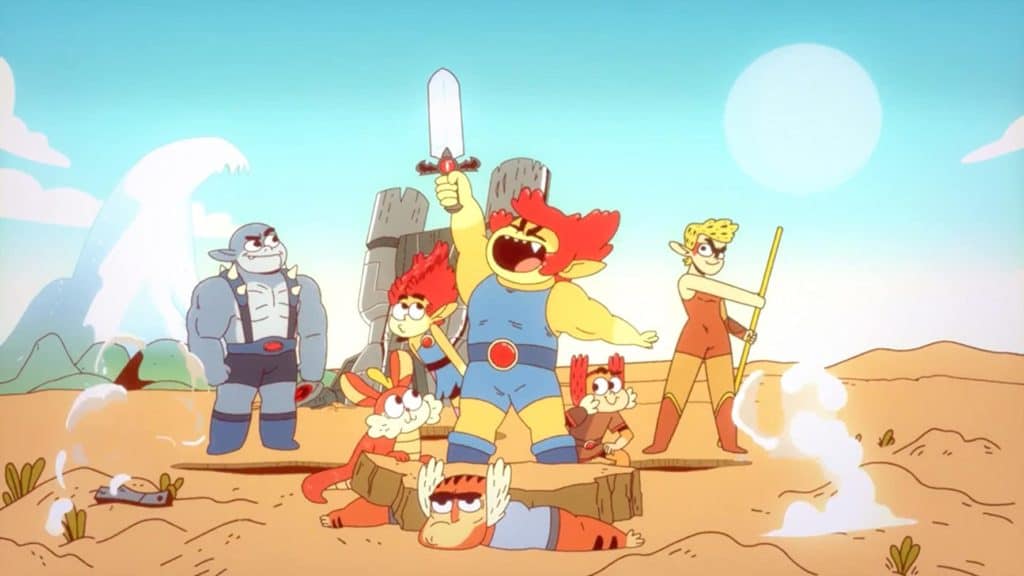 In the past two years, we’ve seen a good number of Saturday Morning Cartoons being reinvented for modern audiences. Some of them are spectacular – She-Ra and the Princesses of Power comes to mind, as is the 2017 reboot of DuckTales. I’m also very much on-board with whatever Kevin Smith is cooking up for He-Man and the Masters of the Universe.

But ThunderCats Roar, which debuts on Cartoon Network on 23 May, is a very different sort of reboot. The original show, ThunderCats, is an action-adventure TV series from the 1980s featuring characters with swole, leotard-fitting bodies and rock hairdos, driving cool vehicles to crowd merchandise shelves. Fast forward to 2020, ThunderCats Roar looks like it slipped out of someone’s hand at mach speed and fell into Pendleton Ward’s crockpot.

Yet I also understand why people don’t. Reactions were polarising when ThunderCats Roar was announced in 2018. Then again, I can’t think of a single reboot of a classic something that didn’t get vitriol of any kind. Even She-Ra, which is now among the most celebrated children’s shows on Netflix, had its fair share of lurid haters.

Reboots come with massive expectations. We project high hopes and our own long-incubated visions on any new incarnation of a show. Nostalgia demands to be placated, while any new sensibilities we cultured over the years into adulthood too needs to be satiated. We want reboots to fix old grievances and elevate the good bits.

So I get the disappointment, even if it strangely eludes me. I’m in the camp that believes reboots can be their own things, for their own audiences. I believe that kids’ shows ought to be kids’ shows in the ways that they want. By shackling them to the original, we may miss out on the ways reboots can re-contextualise the original. The potential new paths that reboots can take are often more meaningful to me than ‘protecting’ my childhood (I’m still not entirely sure that childhoods can be ruined, unless you have a specifically-pimped DeLorean to go back in time).

Let’s backtrack for a sec. For those that didn’t become a slave to 80s and 90s TV, ThunderCats is an animated show with characters created by Tobin “Ted” Wolf that ran from 1985 to 1989. The story centres on the sole feline-themed survivors of the doomed plant of Thundera. The series chronicles their adventures in Third Earth, the planet they crash-landed in, meeting allies and enemies alike while battling the machinations of the evil Mumm-Ra, the series’ main villain.

Leading the pack (pride?) is Lion-O, the young prince of Thundera who wields the mystical Sword of Omens, which grants him a host of powers not limited to allowing him to see far distances (“Sword of Omens, give me sight beyond sight!”) and summoning his pals via the iconic chant of “Thunder, Thunder, THUNDER, ThunderCats! Ho!”

This usually brings his closest allies to the fore, which includes the super-fast Cheetara, the level-headed Tygra, the brains-with-brawns Panthro, resident troublemakers (and child avatars) WilyKit and WilyKat, and annoying team pet Snarf.

If it all sounds silly, it is. The show has no qualms entering WTF territories, but it’s mostly episodic fun with a side of cheesiness. It also has the most kickass intro sequence of any 80s cartoon show.

Fans clamouring for a grittier, more serious revamp actually got an answer in 2011. This reboot, which anime-fies the characters (animation was done by renowned Japanese animation Studio 4°C) and reinvents the premise, now sees a teenage Lion-O being deposed by Mumm-Ra and forced into hiding. It’s a coming-of-age tale of a prince seeking out allies, coming to terms with his responsibilities and reclaiming his rightful place. Despite critical praise, however, it was ultimately cancelled after one season.

ThunderCats (2011) may be ahead of its time, but I feel that any chance of a serious reboot has long slipped from the paws of our glam-rock inspired felines. ThunderCats Roar, being more comedic and light-hearted in the veins of Teen Titans Go! (incidentally a runaway success for Cartoon Network), feels almost like a natural next step.

The ThunderCats that wasn’t meant to be

And that’s not a bad idea. What the creators of the new show strive for is to essentially distill elements of the original show and mould it for modern audiences. In an interview transcript with the ThunderCat Roar’s creators, producer Victor Courtright (former character designer of Pickle and Peanut) notes the changing tones and taste of cartoons over the last 35 years.

“A lot of content is so much faster and so much more jam-packed with excitement and details and things like that, so I think that more than anything else, the tone of the show has been updated to track what I hope modern viewers are excited to see. It is the kind of thing that I am excited about. I really love the energy and pace of the show, you get a lot out of an eleven-minute episode that would have probably taken twice as long or four times as long to get across in the original show,” he said.

I feel that this re-contextualises the 80s cartoon in a way that hasn’t been done before: that of the affectionate parody. Thus far, 80s reboots have mostly been about re-contextualising the original’s premise to explore modern issues. She-Ra went from a gender-flipped expy of He-Man into a show that delves into female empowerment, toxic relationships and abuse in Princesses of Power. Voltron: Legendary Defender effectively marries a rebellion narrative with modern teen drama, at times deconstructing tropes associated with the original incarnation.

ThunderCats Roar has the unique opportunity to highlight the absurdity of the original show as well as 80s cartoons in general. And the show certainly pounced at it. Courtright said in the Q&A that what they’re doing is “mostly exaggerating the original show and taking those characters and pushing them to extremes.”

“We sort of lean into some elements which were a lot smaller in the original and explode them up into full blown character traits. As a fan personally, I am so excited about what we are doing with these characters. I feel like it brings them to a new place and hopefully new viewers fall in love with these and eventually go back and fall in love with the 80’s ones too.”

Viewed in this perspective, I further understand why the notion of something like ThunderCats Roar can become so infuriating to fans. It feels like the show is ridiculing the original – to point out the hilarity and absurdity of something we took seriously as kids. For me, that’s not a negative thing. The stuff I liked as a kid deserves a spot of ridicule, because it’s ridiculous and I’ve long expressed my fair share of mockery (any show which includes lines like “Hold! Your tongue speaks faster than your brain can think! Hold and BE-hold!” deserves MST3K-levels of jibing).

But ridicule can come from a place of sincerity and love. ThunderCats Roar isn’t made out of malice, but of affection for the original show’s inherent and joyous silliness. If Teen Titans Go! is an opportunity to explore the DC universe in a new, humorous light, why can’t ThunderCats Roar be that for its 1980s predecessor?

“We have a deep love for the original content and I think that the sort of stories we are telling and the things we are doing with these characters celebrates that stuff that hasn’t been done since the 80’s show,” Courtright said.

“A lot of these characters you won’t have seen since the one episode they showed up in 1985, so I think we are going well out of our way to make this a celebration of that original show and I hope that people tune in and see some of their old friends return again.”

There is a chance that ThunderCats Roar might end up being a whimper. While I’m all for the more cartoonish aesthetics and energetic animation, I do worry that it may be TOO energetic and unfocused to be a compelling watch. Maybe it won’t be quite as smart, or is far too preoccupied with running at full speed that it fails to slow down and develop its characters. Things might turn out to be like the 2016 revival of The PowerPuff Girls, which disappointed fans and added little to the core franchise.

Maybe it won’t please me, but it may find new fans. And who knows? If ThunderCats Roar does well and reinvigorates interest in the franchise, we might just see more reboots experimenting with varying styles and tones.

I remain hopeful for  ThunderCats Roar. After all, this was what producer Marly Halpern Graser had to say:

“I think the biggest adjustment we made, and from what I can tell has been almost universally approved of, is that in our show Snarf does not talk.”

At least we have that to look forward to.