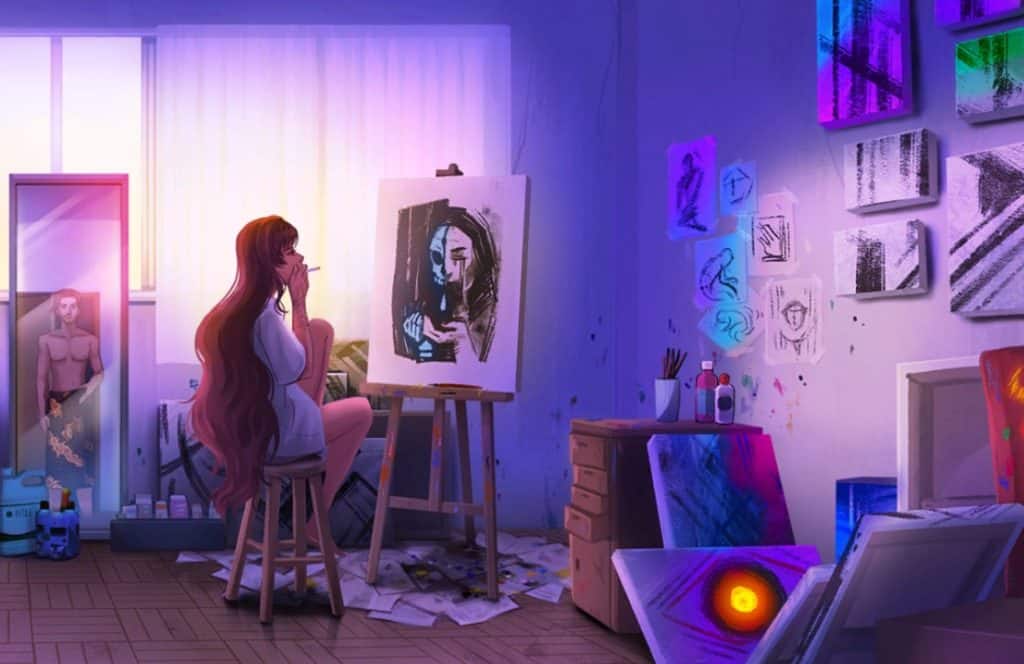 One of my favourite scenes in Fires at Midnight is when one of the protagonists, Chitra, gives way too much thought on the nasi lemak she bought for lunch. She was concerned that there was too much rice, so she threw half of it back into the tapau plastic bag it came in. Her beau has a lower tolerance for spiciness, so she scooped some sambal from his pack into her own. In return, she transferred her share of ikan bilis to him (basically giving away the crunchy, sinful soul of the nasi lemak, in my book).

This scene is precious to me, not just because I get a kick out of seeing Malaysian food lovingly illustrated on screen, but because it shows that our multicultural nation is diverse even in the way we consume our (unofficial) national dish. And that the dish allows for that diversity. It reminds me of how a Malaysian illustrator used nasi lemak to explain the spectrum of sexual preferences, but I digress.

The mini-game is memorable because of what comes after – her boyfriend, Yun, casually takes his own packet of nasi lemak and gives the other to the fashion model he is photographing for work. Chitra, suddenly lunch-less, stewed in silence.

In normal circumstances, Yun’s action may be forgivable – thoughtless and selfish, sure, but possibly just a mistake. Yet by that point in the game, Fires at Midnight has so deftly portrayed the complicated contours of the couple’s bond that a simple mistake becomes another spectre in the haunted relationship.

Moreover, Chitra and Yun are not in normal circumstances.

Available on Steam and Itch.io, Fires is made by Malaysia-based indie studio Persona Theory Games. The game is largely set in the last few days of the year 1999, just before the turn of the millennia. For those of us old enough to remember it, the arrival of Year 2000 was filled with anxiety for a supposedly-prophesied apocalypse (the Y2K bug did not help). Fires fueled this tension with an added twist – a virus is causing people to burst into flames when they make love without feeling in love.

Despite its puritanical premise, the point-and-click narrative game has been described as erotica. Nothing too pornographic, though it may not be something you want to play with your kiddos or grandparents around. And on the note of fair warnings, there are a few jump scares and horror scenes, though this coward found the game mostly tame on terror.

What amazed me was that Fires manages to weave an intricate tale of a relationship tearing at the seams in quite a short time. I completed the story and got the first ending (there are three in total) in under three hours. The length is just right for me — any longer and it would be plodding — although your mileage may vary.

You first play Yun, a photographer, then his girlfriend Chitra, an artist. It is not a perfect relationship; both bring their flaws, insecurities and confusion into the potent chemistry they obviously share. Underneath the bubbling drama, therein lies the central questions that many couples find themselves asking: is this really love, or something else?

But what does a relationship look like in a world where ‘love’ can be defined so clearly? It may look like Yun and Chitra’s – which, in turn, resembles so many real-life experiences (I mean, how many of us Malaysians have held arguments while the “sau gau bou ji” jingle from the newspaper recycling collection van rings incessantly outside?).

In a way, playing Fires is like peeking into an urban fantasy that looks just like our own reality.

Being in both protagonists’ shoes meant we can experience the relationship through their exteriority – what they say and the stuff they own – and their interiority – the thoughts unsaid and the memories unshared. The game cursor itself adds layers to the narrative, quite literally. Shaped like a magnifying glass, the cursor shows another ‘layer’ of what the protagonists actually perceive when hovered over people, the environment, and everyday objects. The ability to ‘see’ through the eyes of Yun and Chitra is effective in unveiling more about their characters.

Fires charms with its introspective lens on two intertwining lives amidst a mysterious pandemic. Yun and Chitra are both fleshed-out characters with complex emotions and relatable inner conflicts; their relationship a compelling yet recognisable script. Its Malaysian backdrop goes beyond the nasi lemak wrappings to touch on racism, sexual harassment, and corruption – a bold move amidst a nation with increasingly tender sensitivities.

If you grew up in the 90s, the easter eggs from our childhood peppered throughout Yun and Chitra’s apartment would send nostalgia down the spine: that picture from the Internet that would not finish loading, the Discman that we coveted, the brick of a cell phone. The game visuals are also gorgeous, evocative, and sometimes downright creative – the flashback unfolding as rough sketches on a drawing pad is *chef’s kiss*.

However, if I were to nitpick, Fires seem to perpetuate the crazed-girlfriend cliché. Chitra’s mental instability that conflates her petulant need for Yun to prove his love seems to check all the boxes of a standard-issue daytime TV heroine.

In fact, when not a tired trope, Chitra is actually the more interesting protagonist between the two, given her checkered upbringing and her headstrong personality. Yet such potential for her character is wasted, taking a backseat as she spirals into jealousy and insecurity.

To be fair, being able to play the game from Chitra’s perspective lends dimensions to the female stereotype she seems to embody. The players see the catalyst to her mental anguish and experience her fear and fury. For example, when Yun callously gave Chitra’s nasi lemak lunch away to someone else, I wanted to scream at him too. ‘Psychotic ladies’ in pop culture are often played for absurdity — to alienate the audience from them (sometimes to give the ‘poor men’ in their lives an excuse to act out). But in the case of Fires, the ‘crazed girlfriend’ is not othered; she is us. Her descent into darkness is not unreasonable, but understandable.

Part of me also wished that Fires had more fervour in tackling the difficult topics like racism and sexual harassment. The game is laudable in not shying away from controversial realities, but it stops short at just showing that these things happen without having much to say about it. This sends a tacit message that these are unavoidable, unfortunate events that are all part and parcel of being Malaysians. If this is what the developers want to convey, it is their prerogative, of course. But it would have been more interesting, possibly game-changing, if a made-in-Malaysia visual novel can look our nation’s uncomfortable truths in the eye.

All in all, Fires is a titillating ride into the psyches underpinning a troubled relationship. Stripped of its mature imageries and romance drama, it is a well-told and refreshing take on a tale as old as time – it takes two to tango, and many more for a relationship to go up in flames.