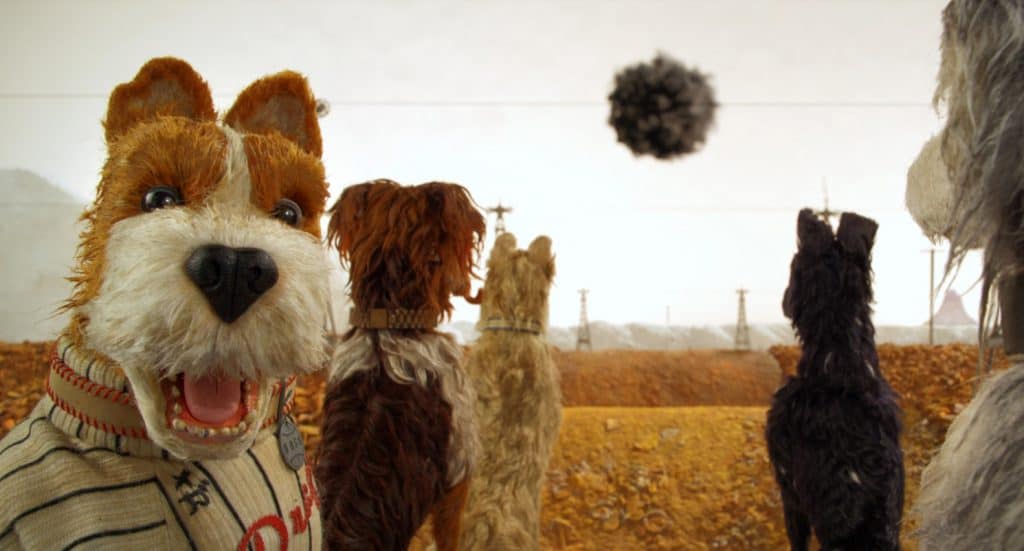 Is there really a white saviour in Isle of Dogs?

Wes Anderson, the senpai of symmetry and enabler of all who disproportionately fuss over proportions, has done it again with his latest movie, Isle of Dogs. The shots are fastidiously centred. The name of the film itself has an even split of letter count. Even the critics are divided down the middle.

One side praised the film for its masterful cinematography, fluid stop-motion puppetry, gorgeous colour palette, and (my new-found favourite phrase) lyrically-disjunctive harmony. The other side chastised it for a tone-deaf cultural portrayal. A common ire: Tracy Walker.

There is no reason for the character, voiced by Greta Gerwig, to be white in a movie set in Japan, according to many Western critics – the most vocal, and likely most heard, pool of reviewers when it comes to Hollywood films.

Isle of Dogs takes place in the fictional, dystopian city of Megasaki (I totally sniggered at this, but sometimes I’m a total child). Led by a corrupt mayor, Megasaki issues a decree to banish all canine pets to the unimaginatively-named Trash Island following a disease outbreak. The film follows the journey of Atari Kobayashi, the 12-year-old ward to the mayor, as he sets out to rescue his bodyguard-dog with his newfound furry friends.

Meanwhile, pro-mutt students stage a protest in the city. This is where Tracy Walker enters the picture.

Spoilers unleashed from here on

Odie Henderson of the RogerEbert.com review site said the freckled exchange student was the one “who rallies the protesters against the mayor”. Steve Rose of The Guardian pretty much said the same: that Tracy “mobilises the passive Japanese populace to rebel and put things right.” Ben Croll of Vanity Fair credits her with “spearheading the resistance”. Sandra Song of Nylon summed the character up as “the leader of [the] movement”.

All of them described Tracy as a “white saviour” – the term that refers to westerners taking on a morally-superior position of ‘fixing’ the problems of non-white people.

There is undeniable passivism, sure. But it is not cultural. It is generational.

As busy as these reviews portrayed Tracy, there are others who believe that her character should have been removed entirely – not just because of the cultural boo-boo she represents, but because she did not achieve much. In her climactic showdown with the mayor along with her fellow picketers, the rambunctious teen ends up having her student exchange visa suspended on the spot. She responds with tears; her resistance and ferocity doused.

But that scene, to me, is perhaps the most important one in the entire Tracy-arc. It tears down the “white saviour” criticism. By immediately muzzling Tracy during her supposed moment of glory, the film shows that her existence is entirely in Japanese’s terms. The power does not reside with the American, no matter how much she swaggers. The power remains with the Japanese.

So I don’t see the lanky firebrand as a white savior. Moeko Fuji didn’t either – the Japan-born wrote an excellent analysis in the New Yorker saying that “if Tracy is a white savior, her role is immediately neutered.”

It is a curious thing, seeing critics so hung up over Isle of Dogs supposedly accentuating Tracy’s ‘leadership’ with Japanese passivism. It made me wonder if we’re watching the same movie. First of all, what passive Japanese? It was Atari, the main protagonist, who stole a plane to look for his dog in a wasteland, as well as slingshot at government-issued drones, human agents and robot dogs meant to nab him.

And it was a Japanese hacker who reverses the mayor’s move to release poison gas on Trash Island, hence saving the trapped canine population. Apart from the blonde Tracy, the student protesters are also overwhelmingly Japanese.

There is undeniable passivism, sure. But it is not cultural. It is generational. The defiant group, represented by Atari and the protesters, are young. Those protecting the status quo, or do little to rock the boat, are of the older generation. Even Professor Watanabe, the scientist running in an election against the incumbent mayor, merely stares in stunned silence when the politician tears up and burn documents proving his invention of a successful cure for the infected dogs.

Jason Schwartzman, story collaborator of Isle of Dogs, confirmed as much in an interview. “Basically, we have all these adults who are not listening to their hearts or conscience, and no one is seeing the great corruption happening. That led us to the younger people, who have to see through the BS. Their minds are more agile. And they have a say.”

Saying it the loudest is perhaps Tracy Walker. But, contrary to what many critics and proponents of the white-saviour argument said, I found little evidence suggesting that Tracy leads the protest. She stands in front a lot, and she supplies much of the bluster, but that’s about it. In fact, her first appearance is in a classroom where a boy in school uniform is leading the school newspaper meeting. Tracy put up her hand, seeking permission to speak.

She tells the room her hunch of a conspiracy on why the dogs were sent to Trash Island. The boy, whom she called “Editor”, replies with a curt “I don’t print hunch.” Hardly the kind of exchange that makes Tracy seem in charge, especially if one sees the Japanese as subservient in the movie.

In another scene of the protest, Tracy is not even the first to raise the defiant fist (another grating point for critics because it looked a lot like the Black Power Salute).

While Tracy does not save the day, she is not completely useless either. She does contribute to the dissenting voice of the youth. And she is the one who convinces/manhandles the scientist’s assistant into giving her the dog flu antidote, which eventually cures the dogs.

The movie does not mean for Tracy to be incapacitated. One of the screenwriters, Kunichi Nomura (who also voiced the mayor), told an interviewer, “Often, one group is persuaded when an outsider brings a different perspective to see what’s happening. Here, that’s Tracy.”

Tracy plays a role in overthrowing a despot. That does not make her the ‘saviour’. But the insistence of many critics to see her as one laid bare how we identify our heroes – loud, brash, and, dare I say, white.