It’s #metoo for Nina Wu, a film that slashes the glamorous wrappings of showbiz | Review 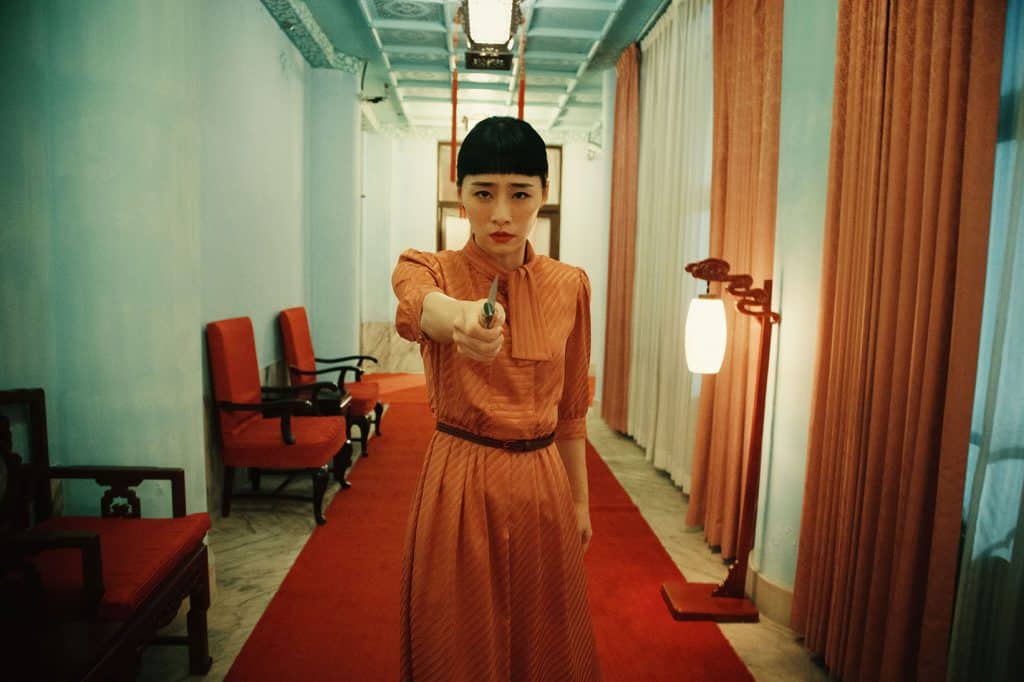 The Chinese have a saying about uncontainable secrets: 纸包不住火, or paper cannot wrap fire. Can dumpling skins do it, though?

I’d say yes, given that I have burned my tongue nine out of 10 times eating dumplings. The glistening white skin obscures the scalding fillings inside.

Dumplings feature heavily in Nina Wu, a film about a struggling actress, Nina, taking on the opportunity of a lifetime to act in her first feature film – at an unexpected cost. The common Chinese dish is what Nina made for dinner. She also ate it seductively for a live webcast in front of – I imagine – a salivating audience, earning some extra dough on the side of a floundering career.

Later, dumplings would appear again in increasingly oppressive situations, such as when she was yelled at for a scene in the feature film, or when she was called into a room that would set the film’s psychological horror in motion.

In Chinese, the film’s title is ‘灼人秘密’, which roughly translates to ‘burning secrets’. Like biting into a steaming dumpling, the film takes its time to get to the meat of the story – how far does Nina go to achieve her dreams? How much scalding can she take?

The Taiwanese-Malaysia collaboration is not a perfect production. Nina Wu‘s homoerotic and family debt subplots are bloated and get in the way of its deftly-disjointed drama. But these are molehills compared to its mountainous audacity, presented in beautiful and brutal strokes. The film peels back the romantic veil of the film industry to reveal its grotesque bullying culture, in a visceral approach that could only be done by someone who had to look the bullies in the eye.

Written by Wu Ke-xi, who plays the titular character, the script is partly based on her own experiences as an actor, and partly inspired by the #metoo wave that was kicked off in Hollywood and exposed the sexual harassment committed by industry bigwigs. Movies about movies are not new, but this is a rare look into the largely-patriarchal, male-dominated showbiz through the lens of a woman.

As Nina Wu’s Myanmar-born director, Midi Z, told The Reporter in Mandarin (translated here): “As soon as I got the script, I loved it, because the whole film is about the private creative journey of a female artist. In the entire history of films, there has never been a movie told from the perspective of a female actress to critique the industry’s processes. Federico Fellini’s 8½ (1963), the world of a male director; François Truffaut’s Day for Night (1973), the world of a male director. Quentin Tarantino’s Once Upon a Time in Hollywood (2019), another male director’s world.”

Nina Wu does not only feel new, but necessary. In a time when we are re-evaluating art made by problematic men, the film forces us to confront our complicity – whether as the audience, or the actors, or the crew – when the filmmaking process tramples on human lives behind the scenes.

Consider Stanley Kubrick, Hollywood’s darling genius. While the late director’s The Shining is widely celebrated, it is easy to forget that we are also indirectly celebrating the psychological torture that Kubrick imposed on actor Shelley Duvall, who played Wendy Torrance in the movie.

In the documentary Stanley Kubrick: A Life in Pictures, Duvall revealed that Kubrick, despite being so charming and well-loved, can “do some pretty cruel things when filming”.  Her co-star Jack Nicholson also said that while he and Kubrick shared a friendly relationship, Kubrick was a “completely different director” with Duvall.

According to Duvall in a conversation with Roger Ebert, she had to “cry 12 hours a day, all day long, the last nine months straight, five or six days a week”, and described the experience as “almost unbearable”. Kubrick also kept her performing the famous baseball bat scene with Nicholson for 127 takes – a world record. And for what? For the strung-out, excessively tearful, and almost-crazed performance of Wendy that ticked all the sexist scream-queen boxes.

More examples abound, unfortunately. In Last Tango in Paris (1972), Maria Schneider, then a 19-year-old actor, was anally penetrated with a stick of butter by co-star Marlon Brando without her consent – a scene that the director, Bernardo Bertolucci, conspired with Brando to do because he “wanted her reaction as a girl, not as an actress”. In Dogville, Nicole Kidman was made to wear a dog collar with a bell attached to it, which she hated, but the director Lars von Trier told The Telegraph that he “had a personal pleasure” seeing her wearing it.

It is important to note that both men and women have suffered in the hands of sadistic directors. And this is why Nina Wu is not just a crucial film for women, but for everyone, especially lovers of films. It forces us to rethink our glorification (or tacit acceptance) of the filmmaking art, of auteurs’ authority, and of the trauma that directors inflict on their actors for realism, or sometimes, for their own misogynistic worldview.

In a Facebook post, Wu wrote about a humiliating episode that happened 12 years ago, when she was an aspiring actor desperate for her big break. When she landed an acting role in a television commercial for a mobile slot machine game, she was overjoyed. But her elation quickly soured when the director cooked up a scene spontaneously; he told Wu to laugh sultrily while her male co-actor slapped her face with a wad of cash. “You should be very happy to be slapped with cash,” the director said, then scolded the co-actor for not slapping her hard enough.

After an entire day of shooting degrading scenes, Wu went home, locked herself in the room and cried the whole night. The mental anguish lasted a month; reality and hallucinations began melding together as she was tormented with nightmares of the shoot whenever she sleeps.

Wu, through Nina Wu, raises uncomfortable questions about compromise. We are often told to sacrifice for our dreams and career – so how much is too much? (Not so) fun fact – the director of Nina Wu had to compromise as well. He had cut 13 different versions of the original movie, including removing scenes depicting homosexuality for the screening in Malaysia, to ensure that the film can be shown in countries of various sensitivities while staying true to the core story.

In light of the #metoo movement, Wu points out that her experience may be negligible compared to the sexual assaults that have come to light. But her script, and the casts’ outstanding performances, showed that humiliation and harassment are separated by a thin line of difference. Both are enabled, even endorsed, by a hierarchical and hypermasculine system.

On the left is Nina’s childhood best friend Kiki (Sung Yu-hua), who is contented to live in a small town and act in a humble stage show for children. The woman on the right (Hsia Yu-chiao) is an unnamed contender for the same feature film role, willing to go all sorts of low to make it big. They symbolise the two opposing forces tearing at Nina’s psyche – she misses acting in the small theatre company with Kiki, but wants more for the career she had toiled in for years.

The colour red is also frequently employed for its double connotations of passion and danger, which is prominent when Nina is put in foreboding positions while her career hangs in the balance. One example was when she was sent to meet the film producer in a hotel room numbered 1408 – seen as a reference to #metoo big bad Harvey Weinstein, who produced a horror film titled 1408.

And, of course, there is the disconcerting dualism of consent. On one hand, Nina obeys the requests of the producer to ‘fight’ for the role while a few other contenders refuse to participate. Yet, a lopsided power dynamic permeates the hotel room – the actors who does not obey the producer are cast out of the ‘audition’, and those who remain, including Nina, clearly understands that the producer is holding their careers hostage. He decides who would get the coveted part, and though he has no right to make demeaning demands of them, he does it anyway, instructing them to act as dogs and rip each other’s clothing to win their breakout role.

Who is responsible for the horrors in the room? Nina Wu offers no easy answer on this. In fact, one can even say that the film complicates an already-difficult #metoo narrative. But it feels less like a statement about a woman’s experience in the film industry, and more like Wu’s personal inquiry into the choices she made in her own career. Is Wu (or Nina) complicit in her own harassment, or a victim of power abuse?

It is this implication of blame on Nina that may give many people indigestion when watching the film. But, for my part, I did not see the film peddling the usual victim-blaming spiel – you know, the variations of “she shouldn’t be dressing like that”, or “she shouldn’t go to his room”. I see the men in the film clearly overstepping, and the kind of lasting damage – including self-rebuke – that their violation inflicts on their prey.

And this is why Nina Wu may be the most important film I’ve watched this year. It took guts to make, and the can of worms it opens takes guts to see.