The mid-trilogy baggage of Godzilla: City on the Edge of Battle | Review 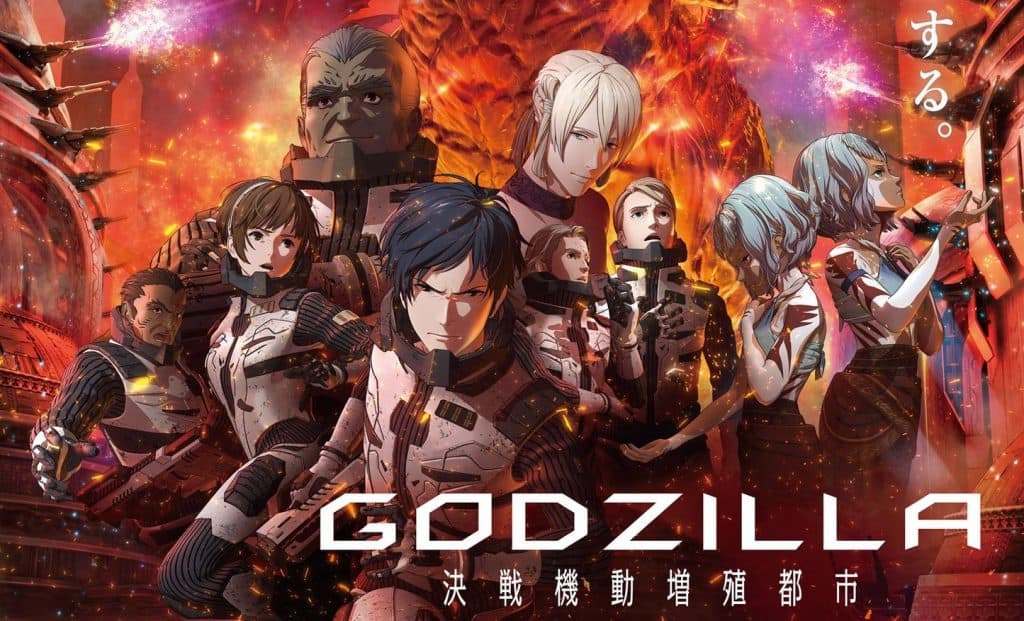 What I think of Godzilla: City on the Edge of Battle in a nutshell:

I am a huge Kaiju fan (no pun intended). I like my monster shows regardless of the classic “Monsters must be destroyed because humans are the good guys” to the more modern “The monsters aren’t the truly monstrous ones”. As such, I tend to have a higher benchmark for monster flicks and this review will reflect that.

Godzilla: City on the Edge of Battle (henceforth referred to as G2: CEB) is the follow up to last year’s Godzilla: Planet of the Monsters. It is the second part of a Netflix-produced Godzilla trilogy.

The trilogy takes place 20,000 years into the future, where mankind had to abandon Earth after Godzilla appeared and decided to go for a lengthy stroll everywhere. The first movie focused on how the original survivors, along with other aliens species whose home worlds were also overtaken by monsters, the Exif and the Bilusaludo, decide to abandon their search for a new homeplanet and return to Earth with hopes of defeating Godzilla and reclaiming it.

Upon their return to Earth, however, they found an unfamiliar planet of untamed jungle, with new terrifying creatures that have evolved to adapt to Godzilla’s biology.

The one true king of the world

The first movie focused on the survivors doing what it takes to survive the hostile environment and come up with a plan to wipe out Godzilla once and for all. Or at least what they thought was Godzilla – making it one of the best bait and switch in any movie of this magnitude (at least from the Kaiju’s point of view).

G2: CEB continues right after the end of the first movie. The main protagonist, Haruo Sakaki (Mamoru Miyano) struggles to lead the surviving attack team to defeat an even larger kaiju. Faced with the thought of a humiliating defeat and abandoning Earth once again, hope comes in the form of a weapon they had thought lost when they first abandoned Earth – the facility where the Bilusaludo built MechaGodzilla.

Right out, I could not decide whether G2: CEB suffers from sequelitis  or that my expectations about what’s going to be in the movie were misplaced.  For those of us (mis)led by the promos into thinking that there will be the fabled showdown between Godzilla and Mechagodzilla, I’ll just say, tone your expectations down a bit.

These are not the Mechagodzilla you’re looking for

The movie highlights a far different confrontation, one closer to modern monster film themes. Instead of giving us a simple but epic humans vs kaiju brawl, the film asks: “How much of your humanity are you willing to lose to destroy the king of monsters?”.

To add to the introspection, thanks to the appearance of a new indigenous human population, G2: CEB also expands on the theories proposed in the first movie: that Earth has chosen Godzilla as the dominant species of the planet after humanity squandered it with pollution and destruction. Personally, I love it when monster movies have that underlying philosophical theme, but the departure from the action-driven first part of the trilogy makes G2: CEB feels a little bit slow, if not disjointed.

Don’t get me wrong, there is still a full on human vs Godzilla smackdown, but the fight feels a little hollow, especially when you get to the climactic end. Some people may like the direction of the movie. In my opinion however, monster movies, especially one as iconic as Godzilla, contains a clear victor in order to justify the point of the conflict. Even the much-criticized 1998 Hollywood version gave us a clear victory to the fight (also an awesome Jamiroquai song). Not in G2: CEB though, hence my disappointment.

It makes sense when you remember that G2: CEB is only the middle of a trilogy. It’s just that it highlights the problem of trilogies where the second movie is only a segue to the third one, leaving a whole lot of unanswered questions at best, and at worse, a mess of expositional flow. I feel the movie falls somewhere in between, which is par the course for sequels of this nature.

Not everything is that bad. If you have to give it credit for anything, the animation for G2: CEB is amazing. It uses CG cell-shading to animate the movie, which gives it a much more realistic feel. Not surprisingly, given that they are animated by the same studio (Polygon Pictures), the animation resembles Knights of Sidonia. This means that the fight scenes are truly on an epic scale. It makes Godzilla work better as an animation than any live action film.

Fast-paced battle scenes make for really bad screenshots, so watch the movie instead.

I did however find the slower scenes a little off-putting. After a while, I realise that the cell-shading technique gave the characters an uncanny valley effect. While I did not notice this in the more action-drven first movie, the fact that two-third of G2: CEB revolves around talking makes this effect more obvious.

All in all, my criticism of City on the Edge of Battle is on the side of harsh because of my expectations for the Kaiju genre. If you’re a fan of Kaiju movies, whatever I say isn’t going to stop you from seeing Godzilla in all its glory, if only to curse yourself because you’re going to have to wait a few more months for the final movie (set for a November 2018 release in Japan, and worldwide on a later date) to see how it resolves itself.

However, for the average viewer, it is a perfectly acceptable popcorn flick on a Friday/Saturday night. It’s not great, but it’s not completely terrible either (that prize still goes to the 1998 Hollywood movie). I would say hold off until the final movie is released, then binge-watch all three movies at once (ala the Netflix way) for the best effect, regardless of how it ends.

Oh one more thing, the last 2 seconds of post-credits scene gave me goosebumps and pretty much left me wanting more. You’ll understand why when you get there.