A Witness Out of the Blue, for a misfire of a whodunit | Review 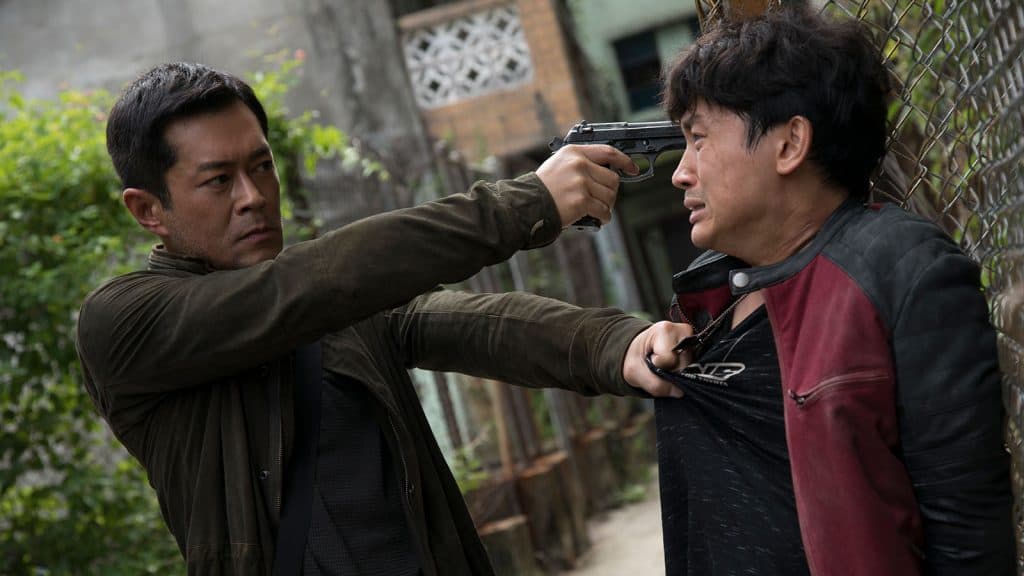 The opening credits of A Witness Out of the Blue features long, loving close-up shots of a parrot (a scarlet macaw, to be precise) set to grim, sinister music.

It’s a strange contrast. The parrot is colourful and cartoonish, yet the music tells us the bird is a harbinger of doom, if not actually malicious itself. How apt, really: like its opening credits, the movie is a clash of tones and ideas that feels like a haphazard chemistry experiment.

It’s not to say that the experiment isn’t intriguing. The movie starts with a murder, and it’s a complicated one. See, the murdered man is part of a robbery gang led by Sean Wong (the incessantly hardworking Louis Koo), which recent jewellery heist ended with the deaths of several police officers and bystanders. However, the gang members themselves started getting picked off one by one, with the bag of stolen jewellery gone missing. The police – commanded by Yip Sir (Phillip Keung, playing every strict, tenacious inspector in Hong Kong movies) – believes Wong to be the main culprit. But one of his bumbling officers, Frank Lam (Louis Cheong), thinks there’s more beneath the surface.

The mystery does run deeper. Claiming innocence and desperate to find the jewellery haul, Wong conducts his own investigation while dodging a nationwide manhunt. He gains some reprieve, at least, by hiding out in a rented room managed by a visually-impaired landlady named Joy (long-time Louis Koo best bud, Jessica Hsuan), who is ignorant of his true identity. In the midst of this, a parrot may very well hold the answer.

The idea of a murder mystery wearing a crime thriller coat is an enticing one, as is the premise of cops and robbers investigating the same murder. One wonders if a more focused director could’ve turned this into something more Infernal Affairs-esque. Yet director Chi-Keung Fung – known more for his offbeat scripts for Stephen Chow (including Shaolin Soccer and The Mermaid) – can’t quite find the consistent footing to make this work.

The movie’s misfire, I feel, is its clashing tones. The start of the movie informs us that this is a serious crime drama, yet large portions of the movie feel like they don’t belong tonally. It’s as if you’re watching The Godfather where half of it plays out like a Wes Anderson movie. It’s jarring at worst, and awkward for the most part.

We experience this early on with the introduction of Frank, arguably the film’s protagonist. We quickly learn that he’s in debt, trying hard to avoid a loan shark. This could’ve been an interesting plot development – we now have a flawed protagonist with a financial situation that may prove an obstacle to the plot and his character arc later on. But then we learn the reason he’s in debt – he has risked his career, reputation and safety in order to… start a cat sanctuary in his apartment.

In an offbeat crime comedy, this wouldn’t be an issue. But in AWOOTB, you’re asked to accept that a brutal murder following a violent heist exists in the same reality as a policeman who would engage with loan sharks in order to rescue strays. Does the SPCA not exist? Do cat sanctuaries make good money?

This tonal issue persists in Louis Koo’s side of the movie. When he’s out investigating, the movie is a gritty thriller. When he returns to Joy’s apartment, it’s a Chinese New Year sitcom about a lonesome grouch forced to live with a manipulative landlady and the three elderly people she cares for.

This feels like a problem of excess. You get the sense that director Fung has the sense of what the movie is and the type of conflicts to thrust his characters into, but takes the most bloated approach to do it. Does Sean the criminal truly need a household of quirky nonagenarians to symbolise the peaceful life he will never have? Wouldn’t Hsuan’s character suffice?

Thing is, the director doesn’t need these excess to explore nuanced, complicated characters – because he already has the actors for it. A Witness portrays Sean as morally conflicting, and this is Koo’s forte — he has long proven his finesse in fleshing out grey, sympathetic criminals in movies like Drug War. He doesn’t need a tacked-on subplot about being insomniac and hallucinating in order to explore his guilt (it takes up quite a bit of his screen time). He’s more than capable of showing you that.

Ditto with the rest of the cast. Louis Cheong, for one, is able to balance between bumbling and uncaring yet quietly brilliant (scenes he shares with Koo are the best), while veterans like Hsuan and Keung did well with the little they have. Chi-Keung Fung only needs to trust them.

I wish I could say that the mystery is a good one at least, but the movie is so rife with contrivances that it’s hardly compelling nor particularly hard to figure out. With so little to offer, this misguided whodunit quickly devolves into a getonwithit. At least there’s parrot eye candy.