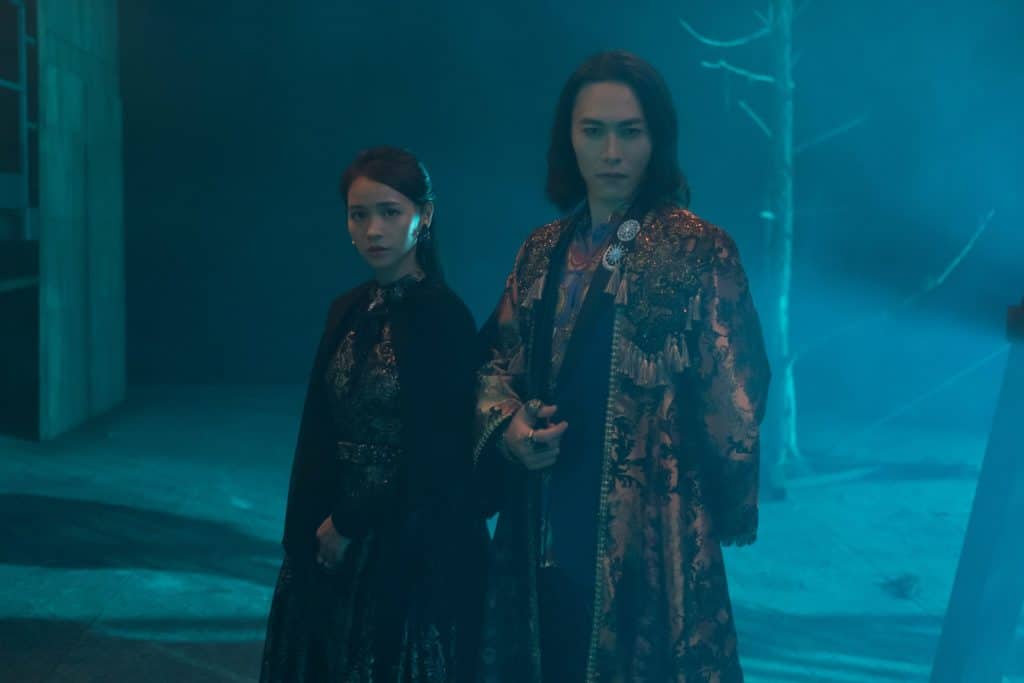 In most ways, The Ghost Bride – Netflix’s first Chinese-language original – is just like the Malaysian state of Malacca that it’s set in. A port city and a trade settlement since its 13th-century founding, Malacca was a melting pot of cultures and ethnicities. The six-part series, which is a Taiwanese-Malaysian co-production, is a melting pot of genres. There’s a pinch of supernatural mystery here, a dash of horror there, a sprinkle of romance on top, and an upended bottle of K-drama underneath.

The result is something beautiful and entertaining, yet uneven in flavour. Not fully committing in one direction makes the series flighty and simple – as Anthony Kao of Cinema Escapist puts it, it’s low-commitment consumption. Not that there’s no value in that. It’s just not Chilling Adventures of Sabrina meets Mr. Vampire that some may be hoping for (or maybe that’s just me).

I suppose some western viewers may find it bizarre (Salon’s critic describes it as “wonderfully weird”), but for Asian audiences long overdosed in swaths of Taiwanese and Hong Kong drama, The Ghost Bride feels at home with its melodrama and, dare I say it, cheesiness. I like it, but then again, I’ve always been able to find myself engaged with Chinese serials regardless of which episode I stumble into. At any rate, supernatural stories centred on Chinese myths and superstitions always intrigue me, and The Ghost Bride practically breathes it.

What I find more fascinating, however, is the real ghost that lingers beneath the story’s surface – that of a restrictive and repressive culture. It’s what you’ll expect to find in a modern tale-telling of late 19th-century Chinese customs, where filial piety is priority and women are expected to be subservient. What better story is there but one of a woman shirking off societal expectations and pursuing her own happiness?

But I’m jumping a little ahead of myself. What’s the story here? It is 1890s Malacca and our protagonist, the spunky Pan Li Lan (played by Huang Pei-jia, who is a joy to watch and whose performance reminds me of Jessica Hsuan in her TVB heydays) has just turned 20-years old. That’s “old maid” status by ancient Chinese standards, and marriage is on the horizon. But Li Lan isn’t quite set on settling down. There’s a seed of hankering for adventure in the great wide somewhere. At the same time, she might just be carrying a torch for her annoyingly handsome childhood friend, Lim Tian Bai (Ludi Lin).

But a strange proposal comes knocking. The matriarch of the wealthy Lim family proposes that Li Lan marry her recently-deceased older son, Tian Ching (Kuang Tian), who is Tian Bai’s cousin. Being a ghost bride means being permanently chained to a household with no hopes of another life, or finding love with Tian Bai, but Madam Lim (Angeline Tan) is promising financial relief to Li Lan’s father, a troubled spice merchant (Jordan Voon).

Strange events begin to occur. Li Lan’s father falls seriously ill, and the ghost of Tian Ching begins to haunt her. It turns out that the rich kid was murdered, and if Li Lan can help find his killer, maybe her father can be saved. Then there’s Er Lang (Wu Kang-Jen), a Lim family servant who claims himself to be a heavenly guard investigating Tian Ching’s otherworldly exploits. It seems like there’s more to the Lim family, and – as Li Lan soon discovers – more to the world than just the land of the living.

In Chinese beliefs – the ones amalgamated from Buddhism and Taoism, at least – ghosts are tethered to the land of the living by not being able to move on. This is an aspect explored in The Ghost Bride, which has a sort of limbo where the dead who are unable or unwilling to reincarnate reside. There, they long for earthly desires – food, riches, their loved ones – and failing to move on.

The same can be said for our cast of characters, most who are either trapped in circumstances beyond their control, or willingly shackling themselves from moving forward. Old Wong (Wilson Tin), the Pan family’s chef who is “sensitive” to ghosts, is forever haunted by the guilt of his childhood friend’s death (the guilt manifests in literal ways). Pan’s father is still grieving his wife’s untimely passing, while Tian Bai – despite being wealthy and handsome – has his wishes and dreams restricted by his duty towards his family, the Lims.

Er Lang is mostly repressed by his jerkass tendencies

Even the more fantastical characters are entombed by various factors. Tian Ching, who is spoilt and greedy, is unable to relinquish any of his desires, and especially after death yearns what he can’t own (a bride, in this case). Even Er Lang, a heavenly guard with mystical powers, is still boxed in by the rules and regulations of heaven – not to mention his own selfishness and lack of empathy.

But perhaps the most restricted characters in the series are the women. Li Lan is bound by societal expectations to be things she doesn’t want to be, and is even manipulated into being a ghost bride to a dead man.

More interesting, however, are the women of the Lim family, who are gripped tighter by cultural norms and expectations. Yan Hong (Jojo Goh), Tian Ching’s older sister, is at odds with Madam Lim. We learn later that it’s due to neglect — Yan Hong isn’t viewed as Madam Lim’s daughter nor as a family heir because she’s not her legitimate child. Madam Lim, who dutifully dotes on her deceased son to the point of never ceasing to burn paper offerings to him, is bound to Tian Ching because that is expected of her as the mother and matriarch of the household. Both bitterly acknowledges that this is, in a larger scope, the machinations of the Lim patriarch.

Most of these prisons are cultural – norms that are to be expected for our characters’ standing in society. It’s expected that Tian Ching, being the eldest son of a wealthy family and thus the heir to the fortune, to get all that he desires, even in death, because it’s expected for his mother to be at his beck and call. Culture – Chinese culture, especially – expects that Madam Lim be dutiful, and that Yan Hong to be nothing more than a pretty vase. The men are equally bound – Tian Bai has no say in whom he marries, just that he’s expected to wed the women best suited to the family’s gains.

These characters are no different from the ghosts that roam the nether-realms, unable to reincarnate. Like the cycle of life and death, it feels like culture itself is inevitable and unchangeable.

Yet one character defies them all – Li Lan, as expected of the protagonist, scoffs at such restrictions. Like a rogue cop, she skirts the lines of societal acceptance. Her story is one of finding freedom to pursue the things she truly desires, and that means breaking every chain laid on her, either by other people (mostly men), or by society.

Li Lan, searching for herself

In fact, the conclusion is one of finding peace within the repression, either by shirking it or merely moving on. This is especially true of the Lim women, who are not so radical as to upend  patriarchy, but acknowledge the need for them to help one another. More importantly, Madam Lim is able to move on from her son’s death and devote herself to the living – her step-daughter Yan Hong.

Does The Ghost Bride convey all these ideas effectively? Not quite. Sometimes arc resolutions come too sudden. Some subplots either vanish or never see a conclusion. The series, I feel, is cursed by its own length – a few more episodes would’ve allowed the characters to develop further and more naturally; yet the plot feels like it was already stretched thin by the series’ end.

And Tian Ching can only chew so much scenery

There are also issues with representation and its depiction of Chinese Peranakan, or Baba-Nyonya, culture, of which Li Lan is part of. Some have already pointed out how the series airbrushed over the ethnicity’s culture and language. I have Baba-Nyonya friends who shook their heads at scenes depicting the characters eating certain dishes with chopsticks — most Baba-Nyonya eat with their hands. The Ghost Bride’s depiction of Peranakan culture is far too centred on its Chinese aspects, seemingly forgetting that it’s a hybrid culture of various dialects and practices.

But I tip my hat to a series that fundamentally understands one core aspect of Chinese culture – that it’s always governed by rules. They can be societal, and they can be supernatural, or superstitious. And sometimes these rules repress and constrict us. And sometimes, in order to move on, we need to learn to let go.