Christopher Robin, and the importance of Pooh | Review “It’s just a matter of how you look at it,” said one character in Disney’s Christopher Robin. In a way, it feels as though the movie is imploring viewers to tilt their heads, perhaps turn the movie this way and that, for a better picture of its fillings and finish.

So I tilted my head, first on one side, then another. On one side, the movie appears as a typical corporate cash-grab preying on nostalgia. On another, it seems like a sincere celebration of childhood simplicity and its value to adults. Which side you choose to see it makes or breaks the film, naturally.

There’s a side that I prefer. But first, a little plot summary.

There was once a boy named Christopher Robin, who plays in the Hundred Acre Wood with his friends, namely Winnie the Pooh, the “bear of very little brain”; Eeyore, an oft-depressed donkey; Piglet, a neurotic piglet; and Tigger, a wonderful thing. There’s also Rabbit, and Owl, and Kanga and Roo. Those were happy times.

The gang’s all here, except they could all do with a good tumble in the dryer

But the boy named Christopher Robin is no more. In his place is a man named Christopher Robin (Ewan McGregor), who was forced to grow up very quickly through very tough circumstances – a dead father, for one, and a World War – and who is now an overworked husband and neglectful father. The Hundred Acre Wood is but a passing memory.

Work hasn’t been good for Christopher Robin, and things are going especially bad when his superior  demands that he works over the weekend – the very weekend Robin has promised his wife Evelyn (Hayley Atwell, of Agent Peggy Carter fame) and daughter Madeline (Bronte Carmichael) that they would visit his old childhood home. Not that Christopher Robin has much of a choice – he needs to figure out how to cut company costs, or a lot of people would lose their jobs.

This is when Winnie the Pooh shows up, unchanged and just as whimsical. But Christopher Robin has no time to reconnect with his childhood. He has adult things to do, after all. But perhaps he really does need the help of his old friends. Perhaps he needs to become Christopher Robin, the boy, who always solves the problems of the Hundred Acre Wood. Perhaps that would solve his real-world problems, too.

Sometimes it’s hard to take the child out of the man. That’s not a bad thing

The movie follows a well-worn structure of movies about overworked fathers and neglected families who need to embrace some sort of childhood magic to overcome their troubles – think Hook and The Santa Clause. The conceit here is that nostalgia is a panacea – that embracing something familiar, say, Winnie the Pooh with the big Disney trademark, could be the solution.

Seen like this, and the movie becomes this arrogant thing. It asserts that nostalgia and childhood joy can erase problems at work, and the trauma of loss and war. It uses familiar characters to manipulate you into this mindset. Seen like this, the movie can feel like a nefarious corporate cash-grab.

That’s one way to look at the movie.

The other way depends a lot on how you perceive Winnie the Pooh (the franchise, at least, not so much A.A Milne’s original books, of which I can’t say a lot about, having never read it).

I didn’t grow up with Pooh. I discovered Pooh as an adult, watching the movies (namely, 1977’s The Many Adventures of Winnie the Pooh, and 2011’s Winnie the Pooh, which is my favourite) mostly as a dogged attempt to catch every theatrically-released Disney movie ever. Pooh is hardly childhood nostalgia for me, but a sort of palate cleanser – refreshingly simple movies full of charm and wit to wash down all that is complicated and dire.

There’s a sort of wisdom in simplicity. Or rather, wisdom when viewing the world in simpler terms. “Doing nothing often leads to the very best kind of something,” Pooh would say, and it either means something to you or nothing at all. It’s that sort of wisdom.

Seen in that perspective, then, Christopher Robin isn’t as much about The Power of Nostalgia as it is about how the simplicity of childhood can yield wonders.

In the same way we appreciate the Pooh stories for its innocence, Christopher Robin learns that overcomplicating his life doesn’t do much, and that changing his perspective could be a lot more helpful. Seen this way, and the movie becomes a sort of meta-narrative over how we perceive the Pooh stories, and how it works for us as adults.

I much prefer viewing the movie like this, because it makes the movie a richer experience. It means that you can see Winnie the Pooh and his friends as the manifestations of Christopher Robin’s inner quirks and personalities. In that sense, the movie becomes about a man rediscovering the answers to happiness that he had known as a child, but long forgotten. It’s also about the importance of passing down your stories and imagination through the generations, which is essentially what the Winnie the Pooh stories has been for parents with children. It understands what Winnie the Pooh stories mean for some people – simple adventures with simple values, but good values nonetheless.

It’s looking at the movie in this perspective that allows me to appreciate the sort of care and craft that went into creating this movie. It’s the many callbacks to the Pooh movies, the little in-jokes and references. It’s the use of the game of Poohsticks as a metaphor. It’s shooting the movie at the exact woods that inspired the stories in the first place. It’s the beautiful scenery of the Hundred Acre Woods, which changes according to the emotions of Christopher Robin, and how the CG characters fit seamlessly in them. 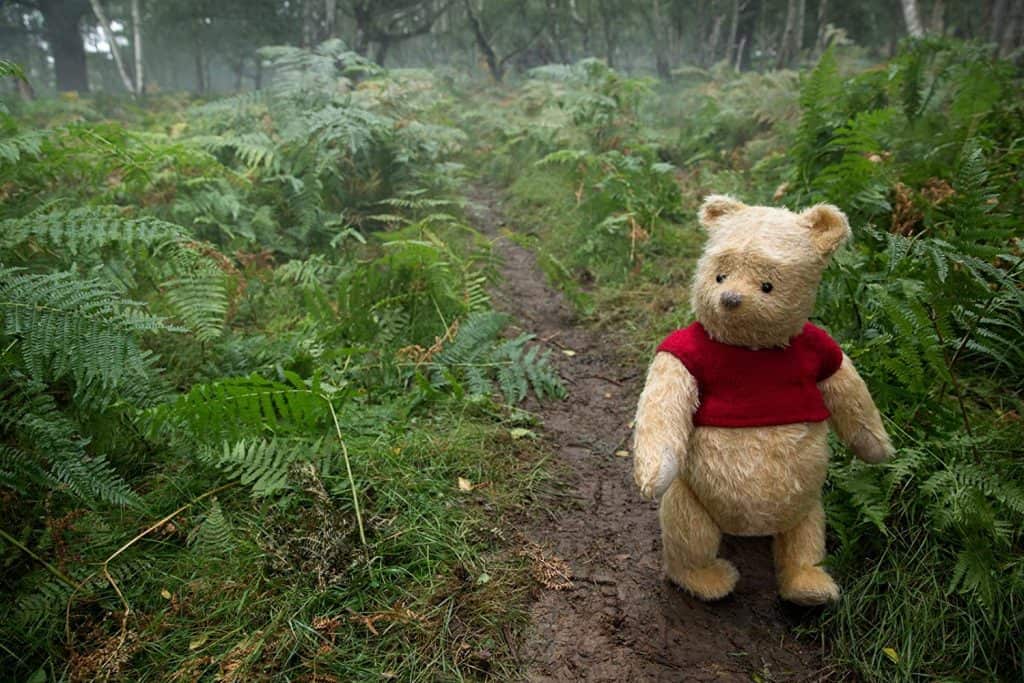 Though if you see a teddy bear walking around in the woods like this, RUN.

Christopher Robin is directed by Marc Forster, whose other films – Finding Neverland and Stranger than Fiction – are also works about the importance of stories and imagination. It’s not his best film. I do feel that he wasted Hayley Atwell’s screen presence by giving her a cookie-cutter role, but there’s also no denying his sense of mood and atmosphere. It’s perhaps the darkest Winnie the Pooh incarnation yet, but it still finds its whimsy. Ewan McGregor’s turn as the titular character is also great, though there’s very little he could do for a character who has never quite been the centre of A.A Milne’s stories.

How the movie works for you will depend on how your head is tilted. Me, well, I prefer to acknowledge the stupid grin I had on my face when hearing the Winnie the Pooh theme merged with Geoff Zanelli and Jon Brion’s score, and chuckling along with the rest of the kids in the cinema at the antics of the silly ol’ bear.