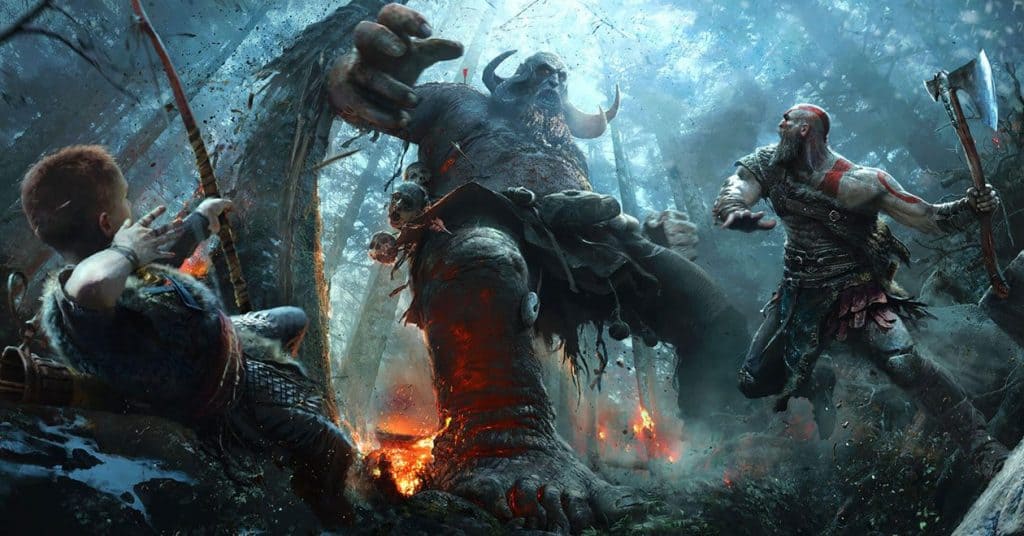 Growing up with my Dad of War

It was roughly 30 minutes into playing the new God of War when I thought to myself: “Wow, this feels like I’m playing my father.”

It is the strangest feeling. Male protagonists in games are mostly two things – power fantasies that allow me to escape with cathartic joy, or blank slates to inject myself into a role-playing environment. Yet in God of War for the Sony PlayStation 4, I was slaying monsters and solving logic puzzles as a character that is uncannily like my late father.

Artist impression only. Actual dad may vary in appearance.

Perhaps this is to be expected. The new God of War, after all, is a game about fatherhood – one that tackles its pressures and complications. It’s a game that deftly transports a character largely defined by rage, violence and patricide into a game that needs him to be calmer, wiser, and with a personal need to reconnect with his estranged son.

This character is Kratos, the titular God of War. In the games prior to this PS4 soft reboot, Kratos has effectively decimated the entire Greek mythology pantheon in shouty, rage-filled vengeance. Now, having somehow wandered into Norse mythology, he finds himself saddled with a son he doesn’t understand, while they set off on a journey to fulfil his dead wife’s final wish.

My father is not entirely Kratos. He is not a  hulking, muscular, pale-skinned god who could effortlessly lift boulders or tear apart an undead warrior barehanded (the latter is debatable, especially when bad exam results are involved).

Dad reacts to my report card

But some similarities are hard to ignore. Both are quick of temper, for one; and both considerably mellowed out as they aged. Both are practical and self-serving, believing altruism to be worthwhile only if reward is apparent. Both are terrible at understanding their sons, and often hesitant with praises.

Sometimes I laugh at the uncanny resemblances. Like Kratos, when my father said “Good”, it was less a praise and more an acknowledgement that I didn’t screw up this time. Occasionally, Atreus would ask how well he was doing in combat, and I would facepalm when Kratos answers with a curt “Adequate”. There needs to be a DLC for a dedicated ‘Praise Son’ button.

My dad doesn’t take well to sass, either. Like Kratos, quips from Atreus would be met with “Quiet, boy,” or “Watch your tongue.” My father, in his crude Malaysian upbringing, would’ve said, “Don’t talk cock.”

We have never understood each other beyond acknowledging, silently, that we cared for each other in our own ways.

But the biggest similarity here isn’t personality. Both Kratos and my father are men with violent pasts.

Most of the details are hazy to me, but my father was, at one point in his life, a Chinese triad member. This means having friends he called “brothers”, and men he served under as “big brothers”. This means having bloodied hands, chipped and cut during street fights and gang tussles.

It couldn’t have been an easy life for my father, but it’s a life he chose out of necessity. His parents were migrants from the southern Chinese island of Hainan, slowly constructing an existence with a coffee shop in a budding town. They were bullied, taken advantage of. Being the eldest son and a brother to four siblings, my father began his life of violence with a need to protect.

It was a life my mother said he left when my brother and I got older, but some nights I see him taking phone calls with a serious face, brows furrowed in concern. He would leave the house and not return until early in the morning. Eavesdropping, I would hear about “trouble” and “negotiations”. You either never fully wash your hands out of triad activities, or violent pasts have no trouble catching up to you.

Like Kratos, my father did his best to hide this aspect of his life from his children. What I learned, I learned through overheard conversations and off-handed testimonials. It wasn’t until his funeral that his past was clearest to me. It was a triad’s funeral, where four joss sticks were stuck on his urn, instead of three. There were chants and prayers I don’t recognise, and the entourage that carried his coffin weren’t family members and his siblings, but his sworn brothers.

Sometimes you don’t consider some truths as absolute until a later time. I always knew my father had a dark past, but the truth only took hold when I threw my last handful of dirt onto his coffin. Yet he remained an enigma to me. We have never understood each other beyond acknowledging, silently, that we cared for each other in our own ways.

But now, as I play through God of War, I feel like I could understand my father, even if a little. Later in the game, Kratos says to Atreus: “You must be better than me. Understand?” They were the exact words my father said to me when I was Atreus’ age, studying in a school where joining gangs was a norm. He meant it so that I would study, and reap the opportunities he fought hard for.

It must be terrifying for my father, the notion that his sons might head down the same violent, difficult path – a fear perfectly captured in God of War, as Kratos equally dreads that his son would restart a violent cycle of rage and vengeance. I wish I could say that playing through God of War has allowed me to come to terms with my father’s shadowy past. But life isn’t so convenient, and one narrative doesn’t fill a gaping hole left when a father departs a tad too early, before there’s time for us to understand one another. I still sit here, regretting that we are never adults together, never got to converse when we’re a little wiser.

But there it was, for about fifty hours or so, I was playing a virtual representative of my father – strong, strict, uncertain, fearful, on an adventure with his son. And during then, I felt that I connected with him a little better. That’s more than I could have asked for in a game.

And maybe that’s enough, for now.