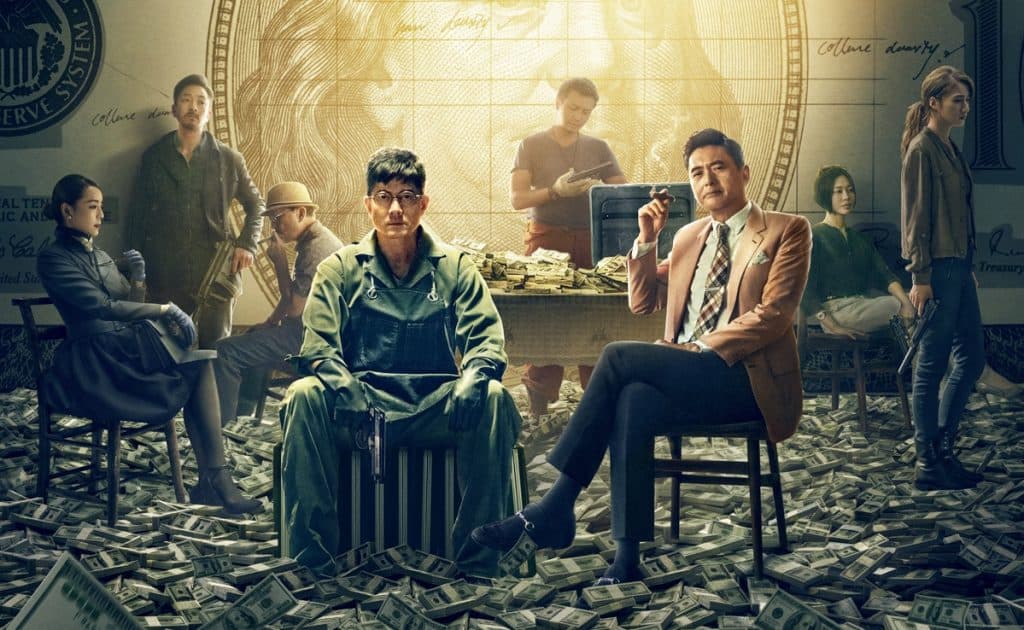 If Project Gutenberg is a painting, it will be a mess. Looked as a whole, the movie seems like a calculated collection of lines arranged into an intricate picture. Trace each line though, and they seem to break and vanish. One wonders if it’s the case of laying so much thread that the knot becomes too tangled.

At any rate, you take paintings as a whole, and in full view, Project Gutenberg will satisfy and entertain. Directed by Infernal Affairs scribe Felix Chong Man-keung, the movie rolls out like well-oiled crime drama that only Hong Kong could – or used to – make. Chong may have only directed one movie before this, but his writing credits stretch from Infernal Affairs to the Overheard trilogy, so he’s right at home with this sort of intricately-planned crime flicks.

Lee Man (played by the unaging Aaron Kwok) is an artist locked up in a Thailand prison when Hong Kong’s finest extradites him and shoves him into an interrogation room. As it turns out, Lee is one of two surviving members of an international counterfeit ring, so the HKPD offers him an ultimatum: either languish in prison or reveal the identity of counterfeit group’s mastermind – the elusive man known as The Painter (Chow Yun-fat).

Unlike other freelancer employers, The Painter is pretty timely with his payments

Thus begins a Usual Suspects-like flashback into Lee’s backstory as he reveals his journey from being a struggling artist in Vancouver to meeting and eventually working with The Painter. Lee’s amazing talent at replicating artwork is invaluable to The Painter’s organisation, and having lived a life failing at creating art, Lee finds solace in being valued by the counterfeit group’s tight-knitted camaraderie. The Painter turns out to be an amicable boss, quite willing to lift Lee’s life “onto stage, in the leading role”. But perhaps his smiley, suave demeanour is just a façade of a violent, terrifying person.

Probably shouldn’t have faked an illness to get off work, with a boss like this

The first half of the film is pure bliss, barrelling down with the sort of old fearless swagger of Hong Kong cinema, and willingly mixing up scenes of intricate crime-planning with old-school shootouts (guns akimbo included). Director Chong injects copious amount of energy in his shots – nothing feels boring, and scenes are often carefully framed. When the bullets start flying, each shot punches through with the precision of a well-done sound mixing. It’s a great film to just watch and hear.

The second half is when the movie unravels, both in plot and, shall I say, consistency. There are things to like here, and things to feel unsatisfied about. But what the movie does keep to is a conviction to its themes, concerning identity and the value we place in art (or, well, anything) – would a fake ever have value?

The centrepiece of the film, though, falls on the two lead’s performances. Kwok convinces as the timid, bundle-of-nerves that is Lee Man, though all props go to Chow’s performance as The Painter – an amalgamation of everything that makes him such a memorable actor to begin with. He steals scenes and hearts alike, switching between charismatic to stern to goofy with relative ease. One particular section is a glorious throwback to his earlier cinematic contributions. If there’s one reason to watch Project Gutenberg, it is to essentially the relive the best parts of Chow Yun-fat’s colourful career.

Project Gutenberg is hardly the instant classic that Infernal Affairs was, but in it is the spirit of Hong Kong cinema at its best – bold, entertaining and messy. Just try not to pick too much at its seams.