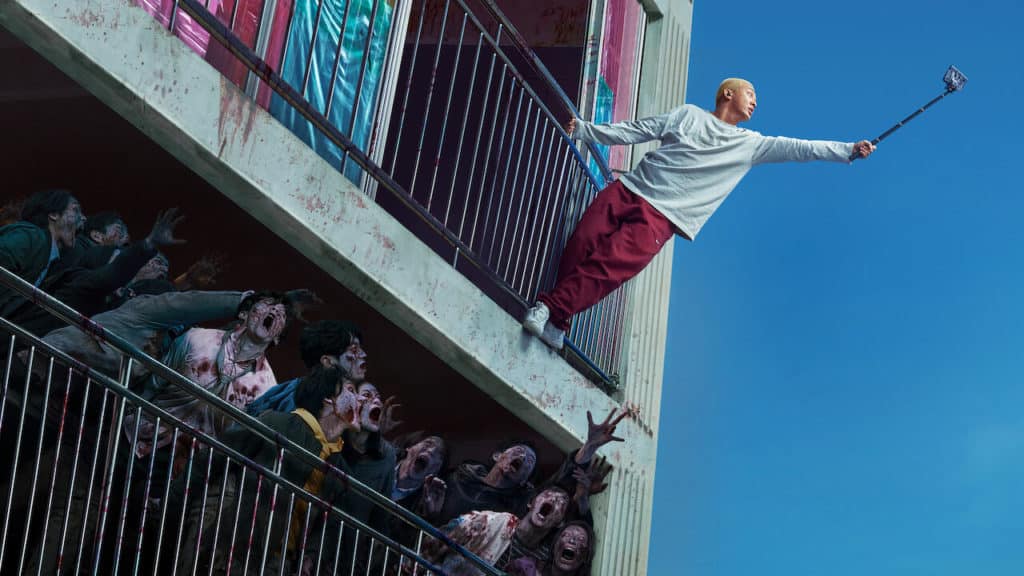 There is a scene fairly early on in #Alive, Il Cho’s zombie flick currently showing on Netflix, that feels painfully relatable. At that point in the film, protagonist Joon-woo (played by Yoo Ah-in of Burning) has just about accepted that he needs to wait out the zombie apocalypse unfolding outside of his apartment. Alone and disconnected from his family, Joon-woo resigns himself to… a game of PlayerUnknown’s Battlegrounds.

I’ve gone through a similar trajectory earlier this year, at the realisation that Covid-19 was becoming a global pandemic and that we’re facing the prospect of a lockdown for an indeterminate amount of time. Overwhelmed and anxious, I turned to video games for a sense of normalcy and predictability.

This scene, among many others, solidifies #Alive (#Saraitda) as the zombie movie of the digital age. While it hardly reinvents the undead wheel, the movie does delve into the possibilities – and pitfalls – of a zombie outbreak in the generation of TikTok, smartphones and gadgets. I suppose one can even call it timely. While production for the movie ended in 2019, #Alive deals with the growing strain of isolation during a quarantine in a way that feels immensely relevant, if not cathartic.

After all, the movie posits that survival can be achieved by taking action. This is a welcoming thought in our own virus-wrecked reality, in a time when we hold very little control of our fates outside of our own due diligence with wearing face masks, hand-washing and social-distancing.

#Alive wastes little time in getting started. It quickly assumes that you’re already familiar with the ways zombie movies work (most of the early exposition is done via the TV in the background), kicking off pandemonium mere minutes after introducing Joon-woo, a video game streamer (and implied shut-in) whose preference for indoor activities meant that he managed to avoid the free-for-all buffet out on the streets.

Joon-woo is able to barricade himself safely, but his food supply is incredibly low to start with (his fault, as he was too busy gaming to get groceries). Equally in short supply is his sanity, which begins to drain as loneliness and depression kicks in.

As it turns out, Joon-woo is not as alone as he thinks. Surviving in the apartment directly opposite him is Yoo-bin (Shin-Hye Park), a young woman with the survival chops to make the cast of The Walking Dead blush. The two find respite in each other, but it’s clear that help isn’t coming, and their supplies are limited.

#Alive has its fair share of zombie thrills and bloody spills, and it’s particularly refreshing to see it played out in an era where the characters can, for one, utilise drones to scout out their surroundings, or find themselves severely hampered by poor telco signals. It’s a zombie film that is tied to technology, not just as tools for survival, but tools for connectivity.

Zombie movies tend to be about finding humanity where there is none, whether it’s about appreciating the small joys like in Zombieland, or about cooperation and sacrifice like in Train to Busan. In that sense, #Alive doesn’t thread new ground, but it ultimately explores the importance of human connection.

As isolation and loneliness kicks in, Joon-woo isn’t just starved of food and water, but of people. And, throughout the film, it’s nice to see technology serving as an important bridge for our characters to connect and communicate. It’s a strangely optimistic film about social media and the internet – that, in spite of it all, we all strife for a form of human connection in any way.

It’s unfortunate, then, that #Alive is rather sparse in characterisation. We learn little of Joon-woo’s and Yoo-bin’s circumstances pre-outbreak – a few extra details would lend more to some of the film’s more poignant scenes, if not to drive the message further.

#Alive also feels like it has little to say. Unlike its South Korean contemporaries Train to Busan, Seoul Station and fellow Netflix resident Kingdom, which are rife with commentary on the country’s class struggles and broken bureaucracy, #Alive lurches along with a simple message on hope and survival. There is one memorable sig at capitalism in the form of a TV ad early on, but #Alive is no Dawn of the Dead at tackling consumerism. I suppose it doesn’t help that #Alive comes after the Korean zombie outings mentioned above. Rather than inject new life into the genre, Il Cho seems more inclined to just ride along and offer little else.

Still, I found myself thoroughly enjoying #Alive. It is a well-shot, well-paced ride with solid thrills and scares. But what I truly liked is its optimism that so long people remain connected to one another, good can happen. Maybe it’s a vibe we all could do with, in these uncertain times.