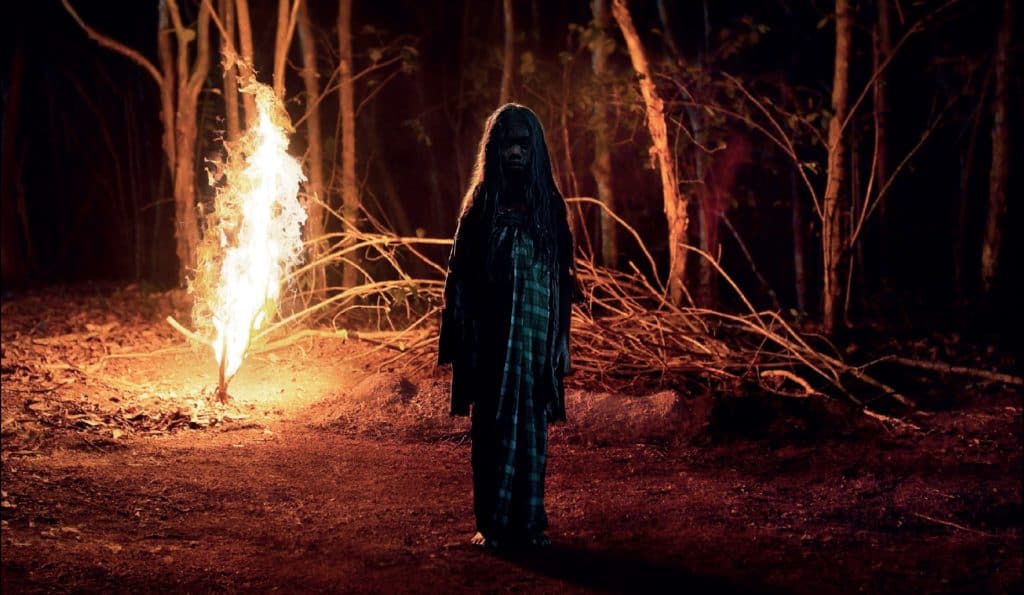 My parents used to warn me of the dangers of the jungle. They were avid hikers, so I’d inadvertently find myself wearing track pants and bathed in insect repellent before entering the gaping maw of trees and undergrowth. There are rules to the jungle, they told me. Don’t relieve yourself at the trees without asking for permission. Don’t yell out people’s names, because something else is listening. And be careful when someone calls out yours – some voices here mean to lead you astray.

In the jungle, they say, there are forces you can’t comprehend. They’re always there, hidden just out of sight. Whether they are benevolent or otherwise, you’ll never know. What’s important is that you respect the land, and stay out of trouble.

Roh (meaning “Soul” in Malay), the second full-length feature from Malaysian indie micro-budget horror production house Kuman Pictures, deals with such uncertain horrors. Set in a lush jungle far from civilisation, this dark fable by Emir Erwan deals not in clear and present danger, but in obfuscation. Sometimes this serves to engross and captivate – it always feels like you’re glimpsing at the truth of the movie, just there beyond the gaps in between the trees. Sometimes it frustrates, making you wonder if you’re straining too hard to look at mere shrubbery.

A mother (Farah Ahmad) and her two children (Mhia Farhana and Harith Haziq) live in the forest. They are not named, but they are the Mother, the older sister (called Along, which denotes the elder sibling) and the younger brother (Ngah, for younger). They live alone, away from a village “just beyond the river”. They are tight-knit, and they get by.

One day, a mysterious, grime-caked girl (Putri Syahadah Nurqaseh) arrives at their doorstep. They take her in, feed her and care for her. To repay their kindness, she foretells their doom (I suppose grim, horrific foreshadowing is a currency in its own right). Strange things, naturally, begin to happen — one of them being the arrival of a Hunter (Nam Ron), who comes demanding for the mysterious girl. Spooked, the family turns to a wandering healer known only as Tok (Junainah Lojong) for help and advice. Things, of course, are not as it appears. In the thick of the forest, how can one tell?

Roh moves glacially, instilling discomfort and paranoia rather than eliciting fear through jump scares. It works – cinematographer Saifuddin Musa manages to turn the crowding trees and excess of greenery into a claustrophobic, foreboding place. The score by Reinchez Ng adds to the tension, instilling dread from beyond the ferns and bushes.

Like the jungle, the point of the film is just as unclear and obfuscated. You’re left to decipher its symbols and imagery, but there’s no clear route to clear answers. Maybe that’s the point – that clear cut truths don’t exist, that we never know what harms or aids us.

This is quite the departure from what Malaysians typically expect of their horror films, which are usually cheap and schlocky. Roh may be cheap – it costs a mere RM360,000 (approximately US$85,800) to produce – but writer/director Emir Ezwan ensures that while there are some horror thrills and spills, it’s not without thought. While it’s sparse in plot and setting, it’s not sparse on solid directing and acting. Its emphasis on mood and mounting suspense places the film closer to the likes of Robert Eggers’s The Witch and Ari Aster’s Hereditary. There are also traces of Na Hong-jin’s The Wailing.

Still, I feel that Roh is a little lost within its own forest of ideas. When I think of its contemporaries like The Witch and The Wailing, where Roh pales in comparison is in creating characters that ground you in their plight. In The Witch, which Roh resembles most, Eggers ensures that audiences understand the wants and desires of its characters – both the adults and their children – which subsequently informs their own personal struggle with the evils of the forest. In The Wailing, you’re introduced to a father with relatable flaws, scrambling to save his daughter against forces he has no hope to comprehend.

In Roh, we’re only ever certain of the mother’s motive – to protect her family. The children, while depicted as hardworking and independent, are not quite as fleshed out. You get a sense that they’re family — codependent and caring. But there’s little else about them. For a film with such a small, intimate cast, I feel like there’s little chance to be intimate with the characters. That makes Roh strangely soulless – like a story heard over campfire, the movie may be disturbing and haunting, yet it’s so distant it leaves you as you leave the woods.

Regardless, Roh feels like a strong, confident next step by production house Kuman Pictures, which first feature film release Two Sisters similarly conjures scares with a certain degree of thought and layers. That Roh can frustrate as much as intrigue means that it’s a film – and a production house – that isn’t afraid of taking risks. Perhaps it can lead Malaysian horror films out of the jungle.