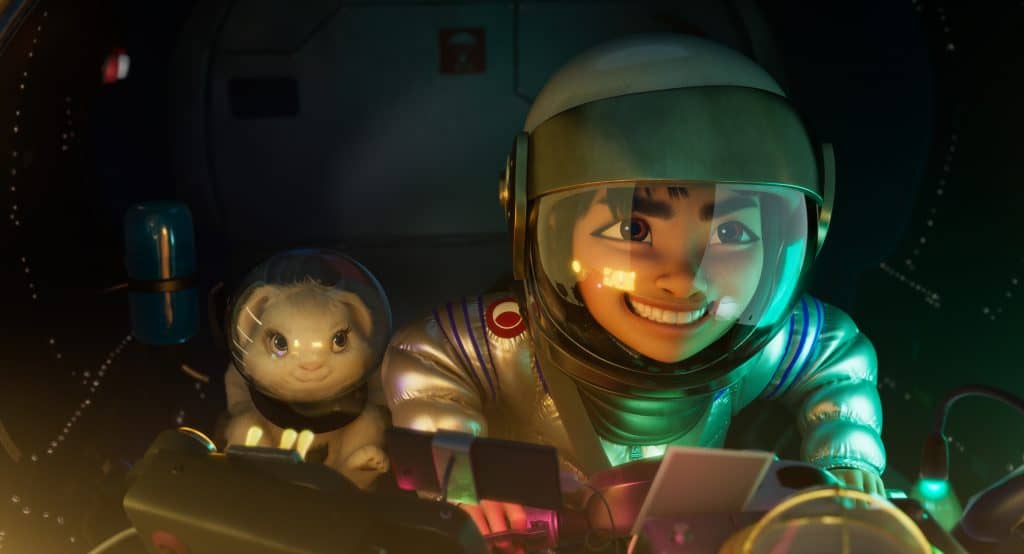 Over the Moon, the Netflix animated feature co-produced with Pearl Studio, feels like déjà vu. Specifically, it takes me back to the 90s, to the man named Don Bluth.

Bluth is an animation legend – the rebel who scorned the depreciating state of the Walt Disney  Animation Studios in the 70s and 80s so much that he struck out on his own and made The Secret of NIMH, An American Tail and The Land Before Time – animated classics that defined the late 80s and his trademark fondness for darker, grimmer tales.

The 90s, however, were not kind to Bluth, who was increasingly saddled with projects where the executive directive essentially boiled down to “make it more Disney” – to be brighter, cuter, and with musical numbers tacked on. Rock-a-Doodle, Thumbelina, A Troll in Central Park and The Pebble and the Penguin were all critical and commercial flops, and in them, you could see an animation champion mostly only able to hold up his craft, but failing to juggle other elements that make a good animated story.

Over the Moon feels very much like a 90s Bluth production. The movie is led by another ex-Disney legend, Glen Keane. His deft hands propped up most of the animated features developed during the Disney Renaissance, including The Little Mermaid, Aladdin and Pocahontas; and he would eventually win an Oscar for Dear Basketball. Much of his works were infused with known Disney tropes: cute animal sidekicks, songs, and even a fast-talking personification of annoyance in the vein of Frozen’s Olaf.

That is in and of itself not an issue. The formula works, as Disney’s slate of animated musicals has shown. It also works in Bluth’s Anastasia, a movie that swung so hard in Disney’s direction that it remains his sole 90s hit (and is still often confused as a Disney movie, though the media giant’s purchase of 20th Century Fox pretty much means that Anastasia is now a Disney Princess™).

But the ingredients of a Disney movie alone doesn’t make the mooncake. You need to bake it right.

The crust of Over the Moon is intriguing enough, as it involves the myth of Chang’e, the Chinese goddess of the moon. Hers is a tragic tale, involving the ingestion of an immortality pill (or potion, depending on the version) that floats her to the moon, where she is separated from her true love, Houyi the Hunter.

It’s a myth centred on eternal love and grief. So is the arc of Over the Moon’s protagonist, Fei Fei (Cathy Ang). When her mother dies, Fei Fei clings tightly to everything about her, from the family mooncake recipes to the tales about Chang’e  that her mother often told.

Years passed, and her father (Jon Cho) is ready to move on. He looks to remarry with a widower named Mrs Zhong (Sandra Oh).Fei Fei isn’t over the moon with this, not at all ready to tarnish her mother’s memory with a stepmother and an annoying stepbrother, Chin (Robert G. Chiu). In a stroke of inspiration (or maybe just a stroke), Fei Fei is convinced that  if she can prove the existence of Chang’e, she can somehow get her father to see that death does not do him and his wife part.  Hence, with the magic of belief and a math-musical number, Fei Fei builds a rocket to the moon. Chin, somehow, ends up tagging along.

Chang’e (Phillipa Soo), as it turns out, is real, and lives in a moon city that she basically rules . She is willing to help Fei Fei, but in turn, Fei Fei would need to present her with a “gift”, and all before the impending end of the lunar cycle (which happens in the course of 30 minutes). In the midst of this, a moon creature named Gobi (Ken Jeong) joins her cause. Adventure and self-discovery ensue.

As a whole, the idea of using Chang’e as a core to explore grief and moving on is a fascinating one. There are moments where its individual parts deliver with sincerity and emotional heft.

The problem lies with Over the Moon’s characters, or rather, the connection between them. For a movie orbiting Chang’e, the movie spends far too little time with the moon goddess, depicted here as self-centred and self-absorbed, yet still grieving over the loss of her love. Fei Fei and Chang’e are meant to affect and inform one another, yet meaningful interactions between them are sparse.

What more, the movie uses the backdrop of the Mid-Autumn Festival (also known as the mooncake festival) to explore the concept of family and togetherness, yet the movie chooses to separate Fei Fei and Chin for a large part of their lunar escapade. You don’t feel their growing relationship.

Instead, Fei Fei is saddled with Gobi, who – in the grand tradition of annoying animated comic reliefs – is injected halfway into the movie. As much as I bemoan characters like Olaf, that darned snowman is at least a connecting bridge between Frozen’s two primary characters. Over the Moon tries to justify Gobi’s existence by making him the exiled former aide to Chang’e, but so little is known about him that he barely has a  stake in the plot. He’s there for exposition and as the hyperactive distraction in case younger audiences lose interest in Fei Fei, which speaks more about the confidence of the storytellers.

You can at least expect some wonderful visuals in Over the Moon, testament to Keane’s pedigree and the prowess of Pearl Studio, which has already proven itself as technical maestros in 2019’s Abominable. But while Keane brings over his Disney expertise in animation and characterisation (Fei Fei’s bunny companion, Bungee, could’ve easily passed the audition for any Disney Princess sidekick), what he didn’t carry over is the way his former studio crafts moving, resonant musical journeys.

Musicals are tricky things to make, even in animated form, where you can at least more easily suspend disbelief that characters would randomly burst into songs. There’s an art to musicals – it needs to marry great songs with proper placements. In an animated movie, which runtime is far shorter than the average stage musical, each song needs to serve a purpose. They need to both be expository and character-driven, and the sequences need to be animated to properly represent the song, which is harder than it seems (with the exception of Anastasia, Bluth himself struggled with musicals. I mean, “Marry the Mole” in Thumbelina is hardly “Be Our Guest”).

Over the Moon’s songs are hits and misses. Some are forgettable, like “Wonderful”, which is shoehorned into the movie so awkwardly that it loses much of its significance even when reprised. “Hey Boy” in particular is poorly conceived and placed, serving no purpose except to halt momentum and give Chin a little something to do.

Others, while not exactly earworms, are functional. The first song, “On the Moon Above”, is set to a gorgeously-animated 2D sequence reminiscent of classic Chinese paintings (one way for Keane to flex). “Mooncakes” lovingly depicts and imparts the cultural (and personal) significance of the Chinese pastry.

The standout sequence would be “Ultraluminary”, a pop extravaganza that serves as an introduction to Chang’e. It’s an energetic sequence, and I don’t know if it’s because of the outlandishly stylish apparels (designed by celebrity designer Guo Pei) and the fact that it’s a Chinese goddess casting out her traditionally-demure depiction, but it reminded me strongly of the concerts of Anita Mui, the inimitable Cantopop star.

It’s not to say that Over the Moon is a soulless, heartless film. I daresay an uplifting flick about making sense of sadness and death, however derivative, can be worthwhile in these trying times. This is also the rare animated film with a primary cast of Asian actors, and there’s an inherent joy in seeing lovingly-depicted scenes of Chinese culture. At the very least, I would say that the movie has its heart in the right place.

But like the Don Bluth movies of the 90s, Over the Moon feels like the case of overabundance. It’s the instance of a film that tries to tick every checkbox of its rivals that it misses its own identity. It’s the scenario of a master animator who, with less, can create such moving works as Dear Basketball and Duet; but when asked to do too much, can only settle on what came before.

It aimed for the stars, but missed the moon.