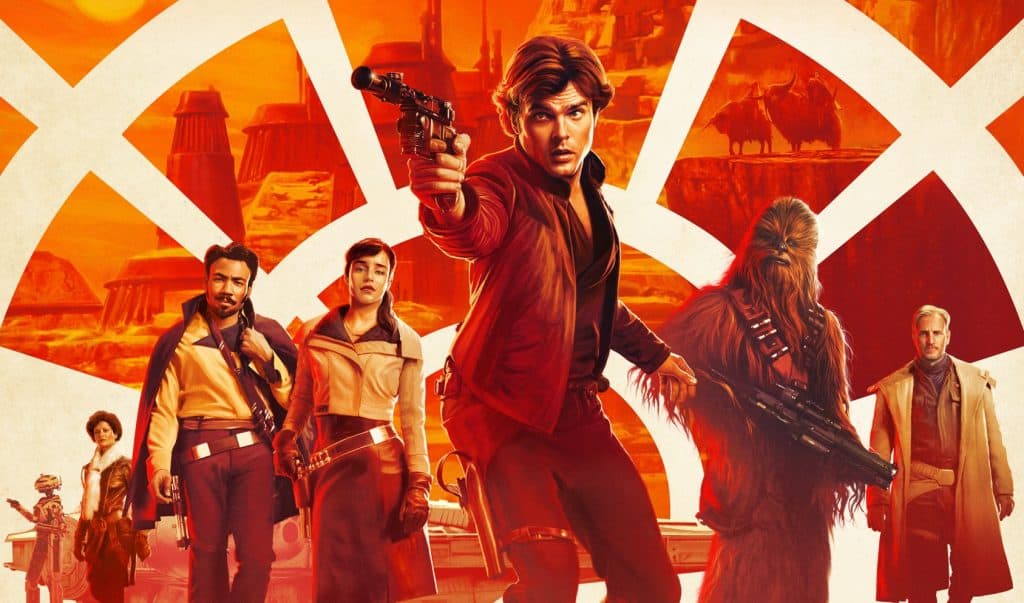 Solo, Star Wars, and the shadow of the Western

I was recently reminded of a college hallway discussion over what Star Wars actually is as a genre. “It’s sci-fi,” a friend had said. “No no no, it’s a space opera,” someone had chimed in. “No, it’s a samurai movie. Just think about it.” We thought about it, and shook our heads. “Samurai films don’t have Sarlaccs,” we said.

My contribution to that discussion was to point out that Star Wars is, at its core, a Western. Largely because I was recently enamoured by A New Hope all over again, and thus couldn’t ignore the way the blasters were worn in saggy holsters like Clint Eastwood would; or how Luke had swung over the Death Star pit with Leia in hand, which seemed like a very cowboy thing to do. But I was young and prone to being wrong all the time.

We’re not all wrong, though (except for the guy who said “sci-fi”, which is objectively and academically wrong. Star Wars is, as most fans would tell you with frothy-mouthed defiance, science fantasy). Star Wars doesn’t belong in one  genre because it’s an amalgamation of many, borrowing tropes and cinematic language in everything from Westerns to jidaigeki to World War II films. In other words, it’s a pastiche, and that’s why it stands on its own – incomparable and, in most ways, inimitable.

So it strikes me as fascinating that the Star Wars spin-off films have taken to extracting these influences and turning them into standalone films. Rogue One is every bit a World War II film by way of The Dirty Dozen (and Inglorious Basterds, for a more modern equivalent).

And Solo: A Star Wars Story? Well, it’s a Western, of course.

It’s a Star Wars movie conceived as such from the get-go (or at least have a Western “feel”), and it’s easy to see why – Disney wanted Star Wars to be another Marvel Cinematic Universe, which means different spin-off movies approaching different genres unified under the same universe. I don’t think it’s an entirely bad idea – it did work with Marvel, after all – though Solo’s disappointing box office returns may disagree.

Intentional or not, the galaxy in Solo is a romanticised history of the Wild West

There are too many reasons attributed to Solo’s “failure”, but I’m not here to add to the speculation. Rather, I’m here to say why I think Solo’s western-movie influences is the movie’s greatest strength, and possibly its greatest weakness.

Before that, though, it’s important to delve into just how much Solo took inspiration from Western movies. It’s not just, as Lucasfilm president Kathleen Kennedy put it, a “feel”. It’s the embracing of a gamut of Western movie tropes and cinematic style, and a Western movie plot.

Everything is lifted from the cinematic (and fictional) depictions of the American frontier. Outlaws who are army deserters (could we consider the Galactic Empire equivalent to the Confederates?), the train heist – pulled off by a ragtag group of criminals, card games and gambling, wealthy and classy gangsters, a standoff. The movie’s depiction of droids as slaves feels deliberate, even, as is its depictions of innocent natives in planets where its resources and people are exploited for empirical and capitalist gains. Intentional or not, the galaxy in Solo is a romanticised history of the Wild West. You’d think that Tatooine is Texas.

And that’s fine. It’s a good idea, in fact, because it’s been a long, long time since we got an earnest Western. Westerns used to be kings of Hollywood – not unlike superhero movies today – which mass proliferation eventually led to stagnation, and subsequently a decline. Western movies today lean to the side of deconstructions and parodies, because there’s nothing romantic about straw-chewing cowboys and gunslingers anymore. Even 2013’s The Lone Ranger feels a need to juggle its William Tell bravado with a commentary of America’s dark, bloody history, creating a tonal mess. In Solo, these allusions are merely that: allusions. Subtext you either catch or you don’t.

The result is a Western movie that isn’t afraid to be a Western. It’s a strange gift for a millennial Asian viewer like me, who didn’t get the memo that Westerns turned to spaghetti and later died off in Blazing Saddles, and have thus been wondering why cowboy movies like Back to the Future Part III didn’t exist anymore. It’s a gift, because I like the romance of the western. Growing up with Chinese heroes means being saddled (haha) with righteously flawless men, stoic and charmless. There’s something endearing about cocksure, hat-tipping rogues who shoot first. There’s something endearing about a Star Wars movie that’s also an old-timey Western.

But this is also perhaps why Solo didn’t work. It’s too earnest a Western. It embodies a long-dead spirit that only exists in parodies today. We can no longer take Westerns at face value because we’ve long forgotten the face. As much as I can grin stupidly at the train heist sequence in Solo, the movie doesn’t hold a second of surprise. In embodying every aspect of the Western, it embodies all the parts that are already tired clichés. Solo doesn’t add anything to the genre. It’s fun. But it’s also pretty boring.

I’m going to blame Joss Whedon’s Firefly here, because no space Western today can be made without being held against it. Firefly is the perfect Western of the modern day. It has gunslingers and train heists executed with a space ship. It winks at the genre, takes it apart, puts it back, and makes it fresh again. Perhaps Chris Lord and Phil Miller, Solo’s original directors before being replaced by Ron Howard, would’ve brought balance here. Their reputation is, after all, largely made out of effectively spoofing and skewering genres, the concept of sequels (in 22 Jump Street) and, heck, even toy lines (The LEGO Movie). Maybe Solo would’ve winked at westerns as much as it winked at Star Wars lore. But alas, it’s all conjecture.

Is this the sole reason why Solo ended up a failure? Of course not. I believe that Star Wars fatigue is a real thing, and I believe that no one was ever all that interested in the backstory of a character that is best kept simple and shrouded in mystery. As a movie, Solo is bogged down by too many characters that, while interesting, didn’t get the time to shine. It would’ve worked better as a TV series. But if it did become a TV series, it would’ve been Firefly.

Yet Solo: A Star Wars Story is also the best earnest Western I’ve watched in a while, and I feel sad that it’ll only be remembered solely as the Star Wars Movie That Never Was. Perhaps there’ll be a place for Solo, in a time not that long ago, in a galaxy not that far away. It belongs in the pantheon of good ol’ Westerns, and I guess I can be fine with that.