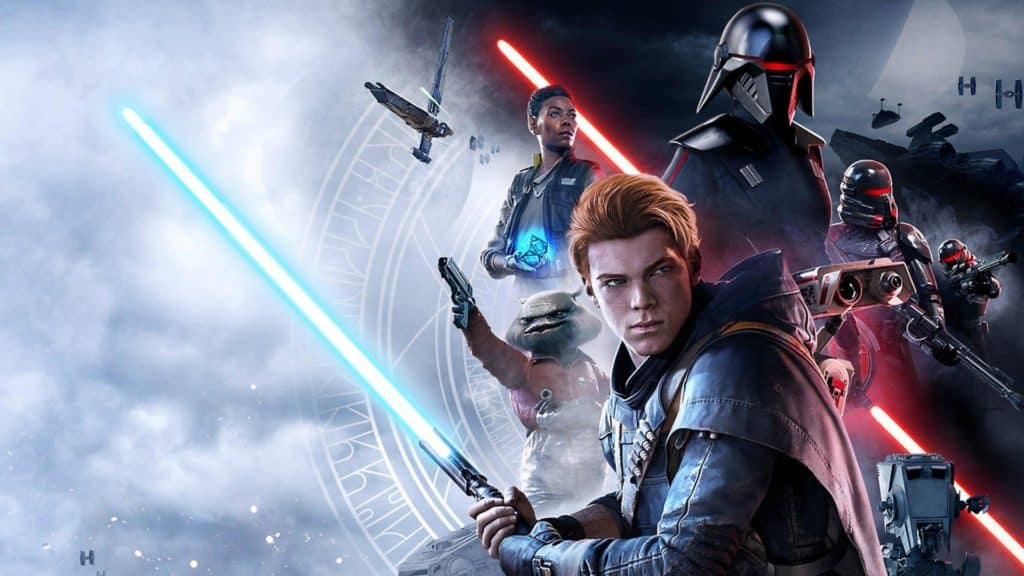 The first Star Wars video game I played was Star Wars Episode I: Jedi Power Battles, possibly the most aptly-named Star Wars video game ever. It may be a movie tie-in – the game takes you through the events of The Phantom Menace – but it’s really all about Jedi, Power and Battles. You get to choose between five Jedi characters to exact Rated T for Teens violence upon countless droids. Nothing stands a chance. The real enemies are the clumsy controls and badly-designed platforming sections.

It’s the perfect Star Wars video game for a 12-year old that was still entranced by the balletic, over-the-top Jedi action from the Prequel Trilogy. It is, however, like a doorway to a certain form of wish-fulfilment high. Now every Star Wars game would need Jedi, Power and Battles, or they wouldn’t be Star Wars games.

And game developers delivered. Games like Jedi Knight II: Jedi Outcast and The Force Unleashed gives you lightsabers and Force abilities as tools of destruction, if not outright cruelty. You’re expected to revel in supremacy – to Force Choke hapless Stormtroopers off the ledges of Bespin, or to dance the Dance of Dismemberment. It’s all about Jedi, Power and Battles, and you start craving more.

In The Force Unleashed, the Force is a metaphor for pent up teen angst

Recent years have offered fewer opportunities for Jedi power trips. You can waltz around the battlefield as one of the many iconic Force wielders in the newer Star Wars: Battlefront games, but they’re not Jedi romps.

When EA announced that Star Wars Jedi: Fallen Order is a single-player action-adventure with a Jedi as the protagonist, something in me ignited like a lightsaber. Finally, a chance for me relive that Jedi high!

What I got, instead, is an experience that surprised me. Yes, Fallen Order has its fair share of Jedi, Power and Battles, but the doses here are controlled, rationed. For the most part, you’re not really playing a full-fledged Jedi, but someone who is coming into it. You have extraordinary abilities, but your might is limited. The game is all about battles, but they’re mostly desperate battles for survival.

Fallen Order gives you a lightsaber and Force powers, but it doesn’t give you power. It gave me something that I haven’t experienced in a Star Wars game before – the feeling of smallness and vulnerability. And that, I feel, is a significant achievement.

Developed by Respawn Entertainment (of Titanfall and Apex Legends fame), Star Wars Jedi: Fallen Order puts you in the quaky boots of Cal Kestis, five years after the events of Revenge of the Sith. Cal was but a young Padawan during the Clone Wars when his master was killed as part of the Great Jedi Purge, and since eked out an existence as a starship scrapper on the planet of Bracca.

In the opening moments of the game, an accident forces Cal to reveal his Force abilities, which draws the attention of two Inquisitors – Force-wielding Jedi hunters trained by the Galactic Empire. Having no choice but to flee, Cal finds himself recruited by Jedi-turned-mercenary Cere Junda and her pilot Greez on a quest to seek out a hidden artefact that may very well determine the fates of all remaining Jedi in the galaxy. For Cal, perhaps it’s a chance to revive a fallen order and discover himself along the way.

Cal sits in a unique position among most other Star Wars game protagonists. Not having completed his training, he doesn’t have the combat experience of someone like Kyle Katarn (the Stormtrooper-turned-mercenary-turned-Jedi protagonist of the Jedi Knight games) nor does he have the might of the Star Destroyer-destroying Galen in The Force Unleashed.

He can do things you can expect Jedi to do, like deflect blaster bolts back at Stormtroopers or partake in some acrobatics. Even early in the game, Cal can hold himself pretty well against the various critters that want to gnaw at his ankles.

That sense of security, however, is very quickly shattered. Cal can easily be mobbed and killed by several Stormtroopers, and there exists multiple fauna that are more than capable of eviscerating our protagonist in a few hits. Wandering around the planet Bogano in an early section of a game, I stumbled into a cave inhabited with what’s essentially a giant, murderous toad, who promptly killed Cal with a single bite.

Battles in Fallen Order can be tense, desperate encounters – expected, perhaps, for a combat system that lifts from Dark Souls, where you’re expected to be more cautious and aware of space and timing. Like Dark Souls, dying means losing any experience points you gained during combat, which you can retrieve by landing a hit on the enemy that killed you. Die again before you can do so, and you’ll lose those experience points for good.

Dying also sends Cal back to the last meditation spot he utilises, which functions like the bonfires of the Dark Souls games. Cal can replenish his health and healing items by resting at these spots, but this also means respawning all the enemies he has defeated.

All these combine into moments of mounting dread and caution, especially when exploring new areas. Tough encounters can quickly dwindle your health and healing items as you try and stumble into the next meditation spot. Once, I ended up depleting my stash of healing stims over some careless mistakes, and found my stomach sinking when I turned a corner to face a Rancor-like creature. For once, a lightsaber and Force powers didn’t do anything to make me feel empowered. For once, playing as Jedi made me feel fear.

Fallen Order knows to keep that feeling of vulnerability even during scripted sections, like when you face off against Inquisitors who clearly outmatch Cal. But the greater achievement here is ensuring the feeling of smallness in a vast universe. More than anything, Fallen Order is excellent at conveying a sense of scale, making Cal seem like a tiny cog in a vast galaxy. This is best exemplified during the first moments of the game, when you’re climbing and shimmying across the scrapyards of Bracca. Seeing towering starships in the distant being taken apart is at once terrifying and comforting – Cal is minuscule in the grand scheme of things, but perhaps his insignificance can keep him safe. For a while, at least.

The game eventually lets Cal become stronger and more proficient, in a way that rather harmoniously marries gameplay design and narrative. The trauma of losing his master has heavily damaged Cal’s connection to the Force, so he has to relearn old skills by progressing through the game. When Cal’s connection to the Force is repaired, he gains access to more skills and upgrades, not to mention additional powers in his arsenal. In time, Cal can Force-pull weaker enemies into his lightsaber, or throw it out like a whirling helicopter of decapitation.

Yet the game never quite lets up. Careless players will still find themselves cornered if they don’t manage crowds properly. The game also steadily introduces newer, more dangerous foes – duels with the Purge Troopers, which are Imperial troops trained and equipped to assist Inquisitors, were particularly tough for me. Being ambushed by bounty hunters when you’re unprepared can lead to some panicked moments.

Not everyone will experience this game quite the same way as I did. Fallen Order comes with several difficulty settings which alter enemy aggression, the leniency of the parry window and the amount of damage Cal takes. I had played on Jedi Master mode, which is equivalent to Hard (granted, it is the most “balanced” setting in terms of aggression, parry window and damage, and I agree that it’s the best difficulty setting to play in). A player on lower difficulties could just easily steamroll through enemies and live out their Jedi power fantasies.

But I truly appreciated Fallen Order’s capability to turn one of pop culture’s most ubiquitously beloved group of powerful characters and make them feel small and vulnerable. I think it ultimately befits Fallen Order’s core themes – that of overcoming past pains. The main characters – be it protagonists and antagonists – are all broken people that have to overcome their trauma, either through purpose or people. Cal’s journey into a hero is an emotional struggle, so it makes sense that he has to physically struggle as well.

Perhaps there is hope still for smaller, more personal games in this galaxy far, far away.