Three serious-looking movies to get serious about 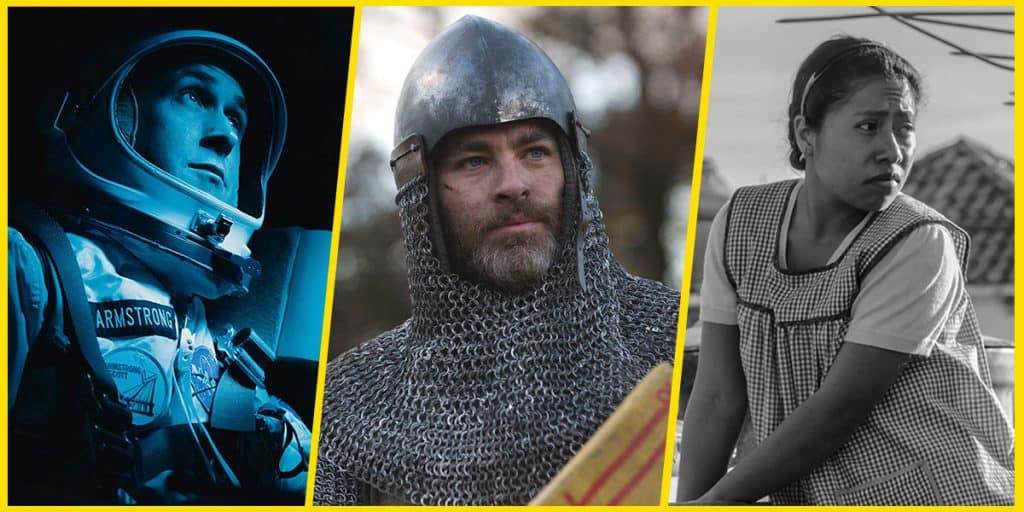 It’s not about merely trying to uphold your film-buff cred. It’s about giving good food to your noggin – about nourishing the grey matter with Strong Themes and Subtle Metaphors. It’s about learning when to tastefully shake your head at cheesy flicks and dumb action blockbusters, because junk food is bad. And yeah, sometimes, it’s about upholding your film-buff cred.

So here are three upcoming serious-looking movies that you can get serious about getting serious. Or, well, name drop at a hang-out sesh to show that you keep up to date on these things. Like me.

No, this isn’t a biopic of Adam as he becomes the first biologist. Rather, it’s inspired by the true story of one Neil Armstrong and the efforts to put him on the moon.

The main reason to get excited about this is its director, Damien Chazelle, which the trailer here helpfully tells you is the director of La La Land and Whiplash. Regardless of what you feel about La La Land, Chazelle is still one of the most promising and talented directors of recent times, with all of his directorial efforts being critical darlings.

First Man is an interesting next step for Chazelle, which previous films (including his first effort, Guy and Madeline on a Park Bench) all have something to do with jazz, owing to his love for it. A dramatic, visceral true account of NASA’s moon landing seems as far away from brass and drums as, well, the moon. But like Chazelle’s previous two films, First Man seems to continue a theme of people doing anything they can to pursue their dreams, even if it means dire, painful sacrifices.

Ryan Gosling, getting out of jazz and into blues

At any rate, if one recalls the intensity and breathlessness of Whiplash, First Man may thrill just as much as it introspects.

First Man comes out October 11 in Malaysia, alongside Bad Times at the El Royale, which looks like a good time.

Outlaw King, a Netflix exclusive, is the story of Robert the Bruce, one of the most famous warriors of Scotland. Robert eventually led Scotland during the First War of Scottish Independence and is a revered Scottish hero.

So yeah, essentially, this is pretty much Braveheart 2, except that it centres on another Scottish hero in the same war (William Wallace had perished earlier). Unlike Braveheart, which is the quintessential rousing medieval epic, Outlaw King seems more interested in being a character study of Robert as he leads the Scots to FREEDOM(!!).

Which should be expected of director David Mackenzie, whose previous film, the heist western Hell or High Water, is more about characters and less about the gunfights. There’ll still be large groups of people sticking pointy things at other people, but between the wars and horses and grey weather, expect several degrees of pondering and navel-gazing.

Robert the Bruce will be played by Chris Pine, arguably the best Hollywood Chris, who has previously worked with Mackenzie in Hell or High Water. He looks gorgeous. The Scottish landscape looks gorgeous. If anything, the movie is shaping up to be a spectacle.

The movie debuts November 6 on Netflix.

“You know, I could really use Diana just about now”

Alfonso Cuarón. That’s it. That’s all you need to know to go watch Roma, his latest film. It’ll be out December 14 on Netflix. Mark it on your calendar. Spread the word. Build a statue. Go!

Need a little more convincing? Okay then. Alfonso Cuarón is the director of Gravity, Children of Men and Harry Potter & the Prisoner of Azkaban (the best Potter movie, if not the one that influenced the tone of the entire series) – three very huge and very good films that are visual marvels and thematic treasure chests.

Most would expect Cuarón to follow up Gravity with something equally as big or ambitious, but Roma is decidedly smaller and more intimate. As per its IMDB description, Roma is a story about a middle-class family in Mexico City during the early 1970s. That’s about it. It’s a personal film – a tale based on his childhood memories, shot in black and white in the neighbourhood he grew up in.

You might not remember it now, but Gravity was a huge hit – US$720 million in the box office, and seven Academy Awards. Cuarón could pitch any movie he wanted and the studios would be willing to list their souls on eBay if it means landing him. But it’s a personal story – his story – that Cuarón chooses to tell. And when an auteur like Cuarón wants to tell a personal story, you damn well listen.

Well, IMDB did neglect to mention that 1970s Mexico City was deep in political turmoil